Human Rights Watch calls for recommendations on the secessionist conflict to be implemented by Pakistan, India and militants 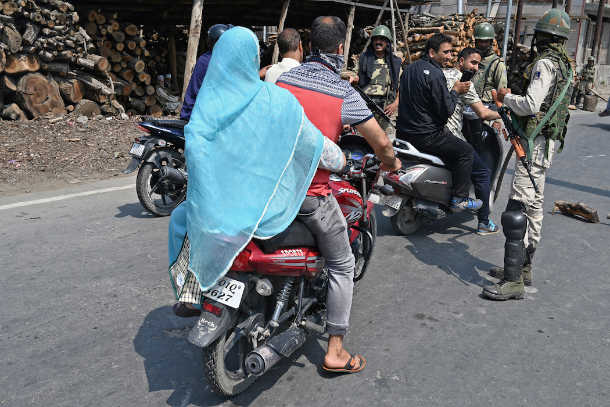 Indian paramilitary troopers stop motorcyclists after authorities imposed travel restrictions in Srinagar, which is located in the Kashmir Valley, on July 8. (AFP photo)

The United Nations has criticized serious human rights violations in both the Indian and Pakistan-administered parts of Kashmir, including alleged summary killings, disappearances and the use of torture.

A 43-page report by the Office of the U.N. High Commissioner for Human Rights (OHCHR), released on July 8, cites abuses by state security forces and militant armed groups.

The international watchdog organization Human Rights Watch called for all parties to the long-running secessionist conflict to follow the U.N.'s latest recommendations.

However, the Indian government complained that the report "ignored" what it described as the core issue of cross-border terrorism.

"India and Pakistan blame each other for human rights violations in Kashmir while ignoring their own responsibility for abuses," said Meenakshi Ganguly, Human Right Watch's South Asia director.

"Authorities in both countries should use the opportunity created by the U.N. report to change course and hold accountable those who have committed serious abuses."

India and Pakistan had to date blamed each other for human rights violations in Kashmir while ignoring their own responsibility for abuses, he added.

OHCHR said both India and Pakistan had failed to take any clear steps to address and implement recommendations made in its earlier June 2018 report on the ongoing strife.

The new report comes after a deadly attack in February by a Pakistan-based militant group, Jaish-e-Mohammad, that killed 40 Indian soldiers.

Amid heightened tensions, there was cross-border artillery shelling at the so-called Line of Control, which is a de facto international border in disputed Kashmir.

The regionally based Coalition of Civil Society reported that conflict-related casualties were the highest in 2018 since 2008, with 586 people killed, including 267 members of armed groups, 159 security forces personnel and 160 civilians.

The Indian government asserted that 238 militants, 86 security forces personnel, and 37 civilians were killed.

OHCHR found that Indian security forces often used excessive force to respond to violent protests that began in July 2016, including continued use of pellet-firing shotguns as a crowd control weapon even though they have caused a large number of civilian deaths and injuries.

The U.N. body called on the Indian government to review its crowd control techniques and rules of engagement.

India was urged to publicly order its security forces to abide by U.N. principles on the use of weapons by law enforcement officers.

The U.N. report also cited a lack of justice for past abuses by Indian security personnel such as killings, forced displacement of local populations, disappearances and alleged sexual violence.

It also criticized what was described as excessive use of force during cordon and search operations that resulted in civilian deaths as well as allegations of torture and deaths in custody.

Since the law came into force in Kashmir in 1990, the Indian government has not allowed the prosecution of any security force personnel in civilian courts.

The U.N. human rights office also called for changes to a law that is often used against protesters and other dissidents, resulting in detentions without charge or trial for up to two years.

The office said that anti-Indian-rule armed militant groups were responsible for human rights abuses including kidnappings, killings of civilians, sexual violence, recruitment of children for armed combat and attacks on people affiliated or associated with political organizations in Jammu and Kashmir state.

It referred to the Financial Action Task Force (FATF), an international inter-governmental organization that monitors money laundering and terrorist financing, which has called on Pakistan to address its "strategic deficiencies" in this regard.

OHCHR also found that human rights violations in Pakistan-held Kashmir included restrictions on freedom of expression and association, institutional discrimination against minority groups and misuse of anti-terrorism laws to target political opponents and activists. It also referred to threats against journalists reporting on the conflict.

It expressed concern over enforced disappearances of people from Pakistan-administered Kashmir, noting allegations that Pakistani intelligence agencies were responsible for the disappearances.

"The Indian government's rejection of the latest U.N. report on human rights in Kashmir shows that it is unwilling to confront its own human rights failures," Ganguly said on behalf of Human Rights Watch.

Both India and Pakistan should accept the findings of the report and support the establishment of an independent investigation that could help stem serious abuses in Kashmir, he added.