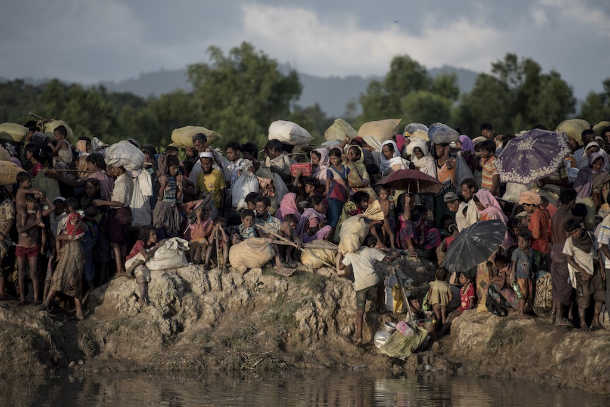 Rohingya refugees fleeing Myanmar arrive at the Naf River on the Bangladesh border on Oct. 10, 2017. In a final report released on Sept. 18, a U.N. probe says six members of Myanmar's military including chief Min Aung Hlaing should be investigated for genocide. (Photo by Fred Dufour/AFP)

The United Nations Fact-Finding Mission found that the Myanmar military's persecution of Rohingya Muslims in Rakhine State amounted to genocide.

In a 444-page report released on Sept.18, it found that the military committed four of the five acts constituting genocide against the minority.

During a U.N. Human Rights Council session on Sept.18, Marzuki Darusman, chairman of the three-member mission, cited the massacre at Min Gyi village in western Rakhine as evidence that Myanmar's military committed the gravest crimes under international law during "clearance operations" last year.

On Aug. 30, 2017, the military accompanied by armed ethnic Rakhine opened fire and began burning houses using launchers from the village's outskirts. Soldiers opened fire directly at the large number of people fleeing toward the shore, according to the report.

"Those who remained on the shore, who numbered in the hundreds, were then rounded up. The soldiers separated women and children from the men. Soldiers then systematically killed the men," Darusman said.

The report added that soldiers then turned to the women and children, who were forced to sit near the shore. Some children were shot, some thrown into the river and others thrown onto a fire.

At least 750 villagers were killed in Min Gyi, according to 875 interviews with victims and witnesses for the report.

It added that at least 10,000 people are thought to have been killed in an operation that lasted more than two months and totally or partially destroyed more than 40 percent of the villages in northern Rakhine.

"The killing was widespread, systematic and brutal," the report says.

Darusman told the council: "We have full confidence in our findings, which are based on a solid body of credible information gathered over an intensive year of work. What we found are crimes that shock the human conscience."

The panel's report is one of the longest ever produced by the U.N.

The U.N. has said that Myanmar military chief Min Aung Hlaing and five other senior generals must be prosecuted for genocide and war crimes against Rohingya and other ethnic minorities.

It described the military's response to the attacks last August by the Arakan Rohingya Salvation Army as brutal and premeditated.

It referred to how Rohingya Muslims are denied citizenship in Myanmar and seen as unwanted Bengali refugees despite having lived in the Buddhist-majority country for many decades.

Myanmar ambassador Kyaw Moe Tun responded to the U.N. report by describing it as one-sided and lacking impartiality and objectivity. "The mission failed to reflect and acknowledge the Myanmar government's efforts and undermines the government's work," he said.

China, which has veto power at the U.N., supported Myanmar and again called on the international community to understand Myanmar as the Rohingya crisis cannot be resolved overnight.