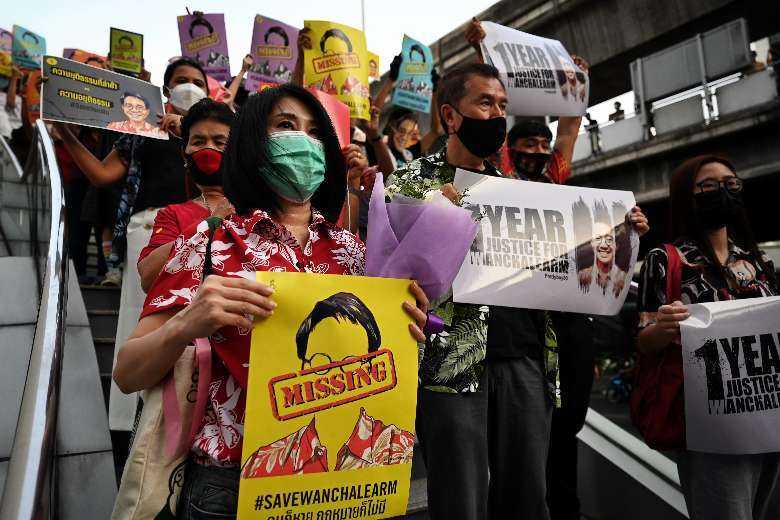 Sitanun Satsaksit (left), sister of Thai activist Wanchalearm Satsaksit who went missing in Cambodia in 2020, and pro-democracy supporters commemorate the first anniversary of his enforced disappearance with a candlelight vigil in Bangkok on June 4, 2021. (Photo: AFP)

Civil society organizations have urged a UN committee to conduct an “independent, transparent and effective investigation” into the disappearance of Thai activist Wanchalearm Satsaksit, who was snatched from a Phnom Penh street in mid-2020.

Wanchalearm was an outspoken critic of the Thai government and the subject of criminal charges. He had initially sought refuge in Laos before fleeing to Cambodia. His abduction was captured on CCTV footage that included witnesses and images of the vehicle used along with its license plate.

“Another official implied that the government would not investigate the matter because there was no formal complaint,” the group of 50 civil society organizations said as the UN Committee on Enforced Disappearances prepares for a preliminary review of enforced disappearances in Cambodia.

The committee has expressed concern over Cambodian authorities’ failure to define and conduct thorough, impartial, independent searches and investigations into reported enforced disappearances, a pattern that continued with Wanchalearm’s case.

Authorities later denied Wanchalearm had been in Cambodia despite the evidence and instead focused on other issues like whether he had proper immigration documentation.

“The very nature of enforced disappearance is a continuous crime. Families of those disappeared have faced incalculable suffering while being deprived of the right to obtain redress and have closure”

A criminal investigation was opened in September 2020 only after his sister Sitanan Satsaksit filed a formal complaint.

She had also overheard part of the abduction as she was on the phone with him at the time, and her family’s inquiry into the progress of investigations has been met with silence.

The Office of the High Commissioner for Human Rights describes enforced disappearances as “the arrest, detention, abduction or any other form of deprivation of liberty by agents of the state.”

Thai authorities twice threatened Sitanan with criminal charges after she spoke publicly about her brother’s plight and the need to enact Thailand’s draft law on the prevention and suppression of torture and enforced disappearances.

The group of 50 civil society organizations includes rights bodies from some 20 countries across Asia including Japan, India, Mongolia, Singapore, Vietnam, Cambodia and Thailand.

They said Cambodia needed to address apparent failures of the investigation, immediately disclose any information they may have about Wanchalearm's fate and whereabouts, and ensure truth, justice and reparations for his family.

Wanchalearm is not the first activist to disappear in Cambodia. Two Vietnamese pro-democracy and labor activists from Cambodia disappeared there in 2007. One of them, Le Tri Tue, went missing after applying for asylum and has not been seen since.

“The very nature of enforced disappearance is a continuous crime,” the group said. “Families of those disappeared have faced incalculable suffering while being deprived of the right to obtain redress and have closure.”

Their statement also added that Cambodia was in violation of its duties under international human rights law to undertake a thorough and impartial investigation without delay, take necessary measures to hold those involved criminally responsible, and guarantee access to information to the families of the victims.