People look at an unexploded rocket in Mrauk U township in Myanmar's Rakhine state on March 16. A mortar shell landed on the outskirts of Mrauk U on Dec. 2, killing three civilians, including two children, and injuring six others. (Photo: AFP)

The United Nations has called for renewed efforts to ensure children’s safety after two died when a heavy shell landed in Rakhine state in fighting between Myanmar’s military and the Arakan Army.

A mortar shell landed on the outskirts of Mrauk U on Dec. 2, killing three civilians, including two children, and injuring six other civilians.

The Arakan Army has blamed the military for mortar shelling but the military has reportedly denied the claim.

UNICEF Myanmar said the latest attack brings the reported number of children killed and injured to 143 since the escalation of violence in Myanmar this year.

It called for intensified efforts “to ensure the safety of children and to protect their right to a peaceful life by exercising maximum restraint in the use of force against civilians.” 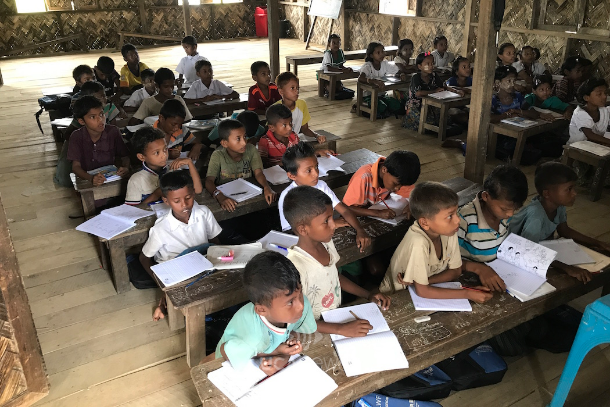 “Our thoughts go to the families of the victims, to those injured and to all children caught up in conflict,” UNICEF Myanmar said in a statement on Dec. 5.

The UN is also concerned about reports of large civilian displacement during continued fighting between the military and armed ethnic groups in Rakhine, Shan and Mon states.

“Children’s safety and their rights must be a primary consideration in Myanmar, and for all adults who have influence over children’s lives,” said the statement.

The Arakan Army is a largely Buddhist militia fighting for greater autonomy from the national government for indigenous ethnic Rakhine in the state.

Rights groups have accused Myanmar’s soldiers of committing war crimes including extrajudicial killings and arbitrary arrests in its fresh campaign against the Arakan Army.

Both the military and Arakan Army have denied accusations of rights abuses as violence has continued in an area that remains sealed off to independent monitors and media.

The latest civilian casualties came just a day after Myanmar’s prominent Catholic leader appealed to the country’s rulers to seek a peaceful political resolution to decades of conflict.

“I appeal to Myanmar’s leaders to put away guns and violence and to reach out in dialogue with all communities in Myanmar — of every race and religion — to seek a peaceful political resolution to decades of conflict and to begin a new process of peace, justice, truth and reconciliation,” Cardinal Charles Bo of Yangon said.

Cardinal Bo said Myanmar has been torn apart for 70 years by ethnic conflict, dictatorships and religious nationalism that have led to horrific bloodshed, death, destruction, slavery, rape and injury. War and hatred have resulted in the displacement of hundreds of thousands.

“Now is the time to seek truth, justice, peace and reconciliation,” he asserted.

Conflict has plagued the Southeast Asian nation since it gained its independence from Britain in 1948.

Thousands of people remain in internally displaced person (IDP) camps in Kachin, northern Shan and Rakhine states due to fighting between the military and ethnic groups.

The government of State Counselor Aung San Suu Kyi has not yet found a way to bring peace to the ethnic regions.