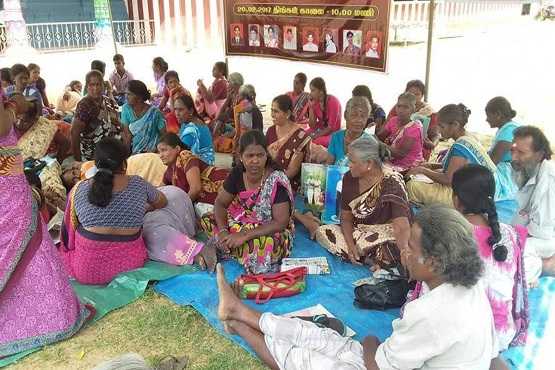 Tamil relatives of disappeared people in Kilinochchi have launched a continuous demonstration from Feb. 20 at the Kandaswamy Hindu Temple in Kilinochchi to pressure the Sri Lankan government to heed their request for information about their missing loved ones. (ucanews.com photo)

The relatives of people who disappeared during Sri Lanka's decades-long civil war have urged the United Nations to pressure the island nation's government to make good on past commitments to investigate past war crimes.

Predominantly from the Tamil ethnic group, the relatives handed over a petition to the U.N. on Feb. 21 in time for the 34th session of the U.N. Human Rights Commission that will be held from Feb. 27 to March 24 in Geneva. Foreign Minister Mangala Samaraweera said that the government would seek more time at the next U.N. human rights session.

Yogarasa Kanagaranjani, a mother of three, who signed the petition, said that the U.N. should take speedy action to solve their problems and not give further time to the Sri Lankan government.

"Through the media we have come to know that the Sri Lankan government is about to extend the time limit on accountability for war crimes another two years. We are against that," said Kanagaranjani who was demonstrating with over 100 relatives in front of Kandasami Hindu Temple in Killinochchi on Feb. 20.

"Many of the parents of the disappeared are aged, sick and close to death. The Sri Lankan government is trying to close this matter through our death by dragging the issue on," she said.

"My son was disappeared in 2009 during the last stage of the war. He got wounded and the army were treating him in Mullivaikal, it was the last I heard about my son," she said.

The 47-nation Human Rights Council in Geneva, the U.N. rights body, on Oct. 1 also approved a resolution for foreign judges and prosecutors to help Sri Lanka try those accused of serious crimes during and after the country's decades-long civil war.

The U.N. Human Rights Office documented killings, sexual violence, enforced disappearances, torture and attacks on civilians between 2002 and 2011 committed on both sides of Sri Lanka's civil war, which came to an end in 2009 when the government overran Tamil guerrillas in the country's north. According to the U.N., the war claimed the lives of at least 40,000 civilians in its final days alone. Anglican Father Selvanathan Parimala Selvan from St. Andrews' Church in Palai in Kilinochchi said that the government's is ignoring the U.N. resolution to have international judges involved.

"The president, prime minister and some other politicians are against the involvement of foreign judges and they want to protect the Sri Lankan security forces from prosecution," said the priest.

"We urge the U.N. not to extend the time limit on war crimes and crimes against humanity but to pressurize the Sri Lankan government by imposing economic sanctions," he said.

Leeladevi Ananda Natarajan, retired assistant commissioner of the Labor Department in Vavuniya, told ucanews.com that the U.N. should insist that the Sri Lankan government release the names of disappeared persons.

"We are ready to disclose the details of the secret camps and torture centers which were run by military," said Natarajan.

"My son was disappeared in 2009 at the Omanthai check point in Vavuniya. Eight years have passed since the war and we still search for our beloved ones; we want our sons back," she said.

The Tamil Lawyers Forum of Sri Lanka called for the establishment of an ad-hoc international tribunal on Feb. 11. They said that Tamil victims opposed any extension of the deadline past March 2017.

Amnesty International said that if the government wants to show its commitment to justice, it should attend to the recommendations of the Consultation Task Force on Reconciliation Mechanisms.

The Association for the Relatives of the Enforced Disappeared in Kilinochchi district, launched a continuous demonstration from Feb. 20, to get the attention of the government and solve their long-lasting sorrows.