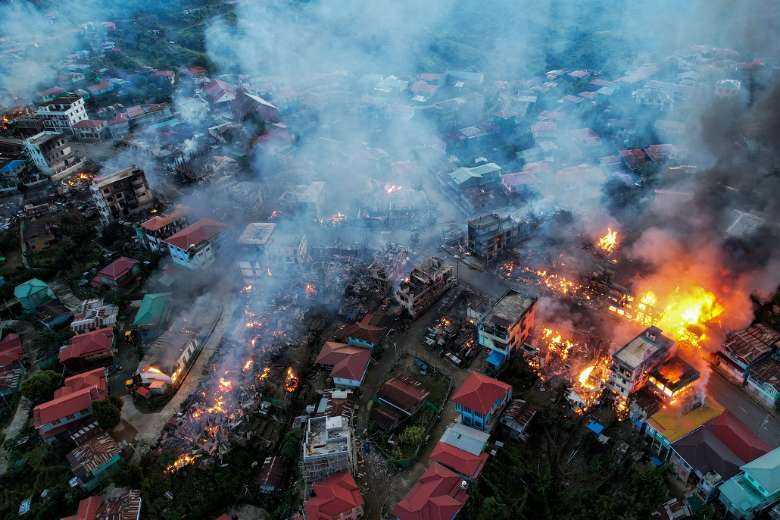 This aerial photo taken on Oct. 29 shows smoke and flames rising from Thantlang in Chin state, where more than 160 buildings have been destroyed by military shelling, according to local media. (Photo: AFP)

The United Nations aid chief has warned that the humanitarian situation in post-coup Myanmar is deteriorating as more than 3 million people are in need of life-saving humanitarian aid.

“Without an end to violence and a peaceful resolution of Myanmar’s crisis, this number will only rise,” Martin Griffiths said on Nov. 8.

He was particularly concerned about the situation in the northwest as hostilities escalated between the military, the Chinland Defense Force in Chin state and the People’s Defense Forces in Magway and Sagaing regions.

“More than 37,000 people, including women and children, have been newly displaced, and more than 160 homes have been burned, including churches and the offices of a humanitarian organization,” Griffiths noted.

More than 223,000 people remain internally displaced, including 165,000 in the southeast, adding to those already displaced in Rakhine, Chin, Shan and Kachin states, according to the United Nations.

He stressed that attacks on civilians and civilian structures, including humanitarian workers and facilities, are banned under international humanitarian law and “they must stop immediately.”

“I call on the Myanmar armed forces — and all parties — to facilitate safe, rapid and unimpeded humanitarian access,” he said, adding “the world is watching.”

The meeting also coincided with the first anniversary of Myanmar’s general election that Aung San Suu Kyi’s National League for Democracy (NLD) won in a landslide victory over the military-linked Union Solidarity and Development Party.

The military, however, ousted the ruling NLD following the Feb. 1 coup by claiming electoral fraud despite international monitoring groups saying the election was free and fair.

“The United Nations reiterates its call on the military to respect the will of the people and put the country back on track to democratic transition,” UN spokesman Stephane Dujarric said.

The US State Department has pledged that it will work to end military oppression and restore democracy in the beleaguered country.

“The military’s subsequent and ongoing violent crackdown has further undermined human rights and fundamental freedoms and reversed a decade of progress toward a genuine democracy,” US Secretary of State Anthony Blinken said on Nov. 8.

“We honor the people of Myanmar striving to restore democracy, respect for human rights, and the rule of law in their country, including more than 1,300 innocent people who have lost their lives in that struggle,” he said.

The European Union has slammed the overthrow of the civilian government elected by the democratic will of Myanmar people, calling it a “blatant violation of the will of the people, with disastrous humanitarian, social, economic and human rights consequences.”

“The European Union condemns in the strongest terms the attacks by the military on civilians and villages in Chin state, including the use of torture, sexual violence, arbitrary detention and the destruction of private property and religious sites,” EU foreign policy chief Josep Borrel said in a Nov. 8 statement which was issued on the first anniversary of Myanmar’s 2020 elections.

Since the military coup, the Southeast Asian nation has been plagued by unrest, with peaceful demonstrations against the military rule which have been met by a fierce crackdown by the military that triggered low-level insurgency in urban areas and guerrilla attacks in rural and ethnic areas where minority groups have been engaging in intensifying clashes with the military.