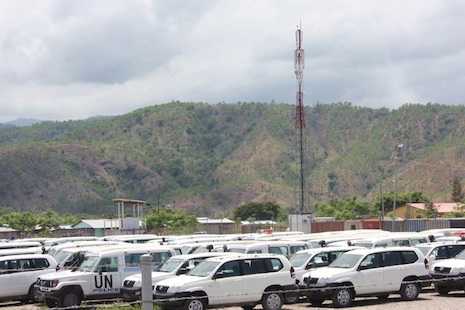 The United Nations Integrated Mission in Timor Leste (UNMIT) on Wednesday began a public auction of equipment as part of proceedings to finalize its six-year mission in the country that officially ended last year.

Finn Reske-Nielsen, head of the UN’s mission in Timor Leste, told reporters on Tuesday that the auctions were expected to conclude at the end of March.

“There is a liquidation team dealing with the UNMIT’s properties which remain available in some places in the state capital of Dili.”

UNMIT will also hand over offices and equipment used by its staff from 2006-12 in several districts and in Presidente Nicolau Lobato International Airport.

“In all, 3,300 items including computers, radio communications, generators and water pumps will be given to the government of Timor Leste through its minister of finance [Emilia Pires],” Reske-Nielsen said.

The UNMIT mission officially ended last year, at which time more than 1,000 staff members and 350 volunteers left the country.

But 20 international staff in cooperation with 27 Timorese will continue to conduct investigations into human rights violations committed in 1999.

That year a UN-mandated referendum in which the country voted overwhelmingly for independence from Indonesia was marred by widespread killings, disappearances and internal displacement that international rights groups have said were orchestrated by the Indonesian military or its proxies.

The council mandated UNMIT to support the government of Timor Leste and relevant institutions with a view to consolidating stability, enhancing a culture of democratic governance and facilitating political dialogue.