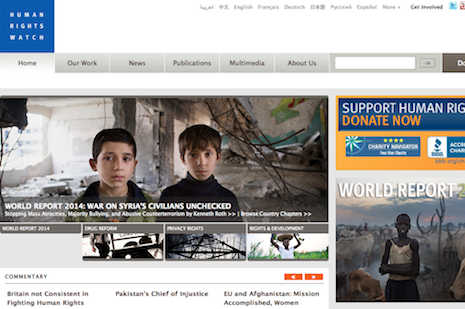 Yet despite signs that abusive regimes could be held to account, conditions worsened last year in several countries including Vietnam and Cambodia, the New York-based organization said. Religious persecution is also continuing in the region, often without punishment.

Rights organizations including Human Rights Watch (HRW) had been scathing of the UNHRC after it launched in 2006.

But the UN’s top rights body has “come into its own,” helping to strengthen networks to fight abuses while producing tangible progress, particularly in Asia, according to HRW’s Executive Director Kenneth Roth.

“The positive results were most visible in Sri Lanka,” he said.

The council has stepped up pressure on President Mahinda Rajapaksa to investigate atrocities including the deaths of an estimated 40,000 civilians during the final days before Sri Lanka’s army crushed the rebel Tamil Tigers in 2009.

"We have faith in the UN with regards to accountability issues in Sri Lanka," said Anantha Sasitharan, a Tamil rights activists and member of the Northern Provincial Council.

"Victims [of rights abuses] have complained to several presidential commissions, but nothing has happened. I don't have hope in local investigations."

Addressing North Korea, the UN rights body in March took the unprecedented step of launching a commission of inquiry into alleged violations – including gulag-style prison camps – during a year ending with Kim Jong-un’s execution of uncle Jang Song Thaek on treason charges.

“The fiction that Kim Jong-un might be somehow more moderate because of his education in Switzerland has been thoroughly refuted by the continued brutality of the government he now leads,” said HRW’s Deputy Asia Director Phil Robertson.

The report was also scathing of Cambodia, where Prime Minister Hun Sen has led a bloody crackdown on the opposition after a rigged July election, and Vietnam whose ruling Communist Party ratified a new constitution in November amid arrests targeting bloggers and activists.

Vietnam now claims the ominous title of holding the most political prisoners in Southeast Asia following mass amnesties in Myanmar, according to latest HRW figures.

“Instead of putting its critics in prison, the Vietnamese government should engage with their ideas, and accept that one-party states should be consigned to the dustbins of history,” said HRW’s Asia Director Brad Adams.

In Bangladesh, the nominally independent National Human Rights Commission accused HRW of being “one-sided and exaggerated” in its grave assessment of the country.

The US rights group accused Prime Minister Sheikh Hasina’s government of killing and gagging its opponents, including the Bangladesh National Party (BNP) which boycotted polls this month, and Jamaat-e-Islami which was barred from running during a chaotic pre-election year.

“Like in the past, HRW once again takes the side of terrorists in the name of human rights,” said National Human Rights Commission Chairman Mizanur Rahman.

Without naming Jamaat or the BNP, Rahman accused both opposition parties of killing innocent people and law enforcers amid a protracted political conflict as each side has battled for power.

The Nobel laureate was accused of pandering to the military as it decides whether she can participate in presidential elections at the end of 2015.

“The world was apparently mistaken to assume that as a revered victim of rights abuse she would also be a principled defender of rights,” said Roth.

But Han Thar Myint, a Central Executive Committee member of Suu Kyi's National League for Democracy (NLD), denied the claim that Suu Kyi has put politics above a principled stand on human rights.

"The NLD has not changed its stand on the basic human rights of our people, but we also don't take a one-sided stand on condemning religious violence in Rakhine state since Rakhine are also an ethnic minority," he said.

Killings of Rohingyas in majority-Buddhist Myanmar continued last week with reports that as many as 60 people may have died in Maungdaw, a Rohingya township in western Rakhine State.

David Mathieson, HRW’s senior Myanmar researcher, said following a recent visit that restricted access to the area had made it impossible to determine the extent of the latest violent incident.

Other countries in the region also witnessed significant religious persecution in 2013, said HRW, with China ranking among the worst offenders.

The report noted continued religious intolerance in Indonesia where Christians and minority Islamic sects faced discrimination by militant Sunni Islamist groups, and in India as clashes escalated between majority Hindus, Muslims and Christians ahead of May elections.

In Papua New Guinea, government changes to the law last year helped combat a spate of brutal attacks against women perceived as “sorcerers” so that such cases would be treated as murder.

HRW warned, however, that a decision to expand the scope of the death penalty undermined progress: “Resuming executions would be a serious step backward,” said Adams.