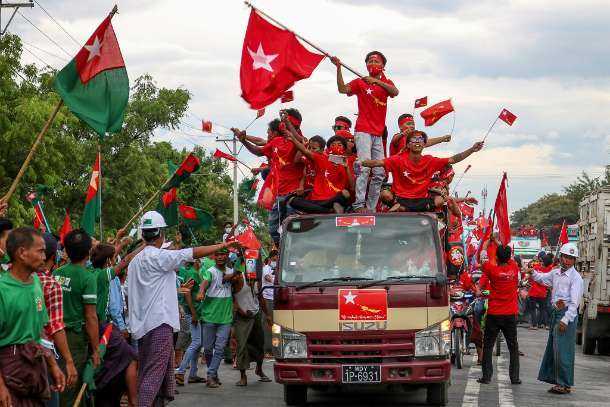 Supporters of the National League for Democracy pass supporters of the opposition Union Solidarity and Development Party, seen left, during a campaign in Wundwin, near Mandalay, on Sept. 19. (Photo: AFP)

A United Nations rights envoy has warned Myanmar’s upcoming polls will fail to meet the standards of “free, fair, credible and transparent elections” that reflect the will of the people even before a single vote has been cast.

Addressing the Human Rights Council, Thomas Andrews, special rapporteur on the situation of human rights, said the results of elections slated for Nov. 8 could not accurately reflect the will of the people when “the right to vote was denied because of a person’s race, ethnicity or religion.”

“I had seen no evidence that the government was willing or prepared to facilitate the right to vote for hundreds of thousands of voting age Rohingya in Rakhine state or in refugee camps in Bangladesh,” Andrews said on Sept. 22.

He noted that Roingya will not be able to vote in the upcoming elections and “disenfranchising voters in conflict areas would lead to danger and more conflict.”

Andrews also said restricted access to information and the internet had negative impacts on human rights in the context of the Covid-19 pandemic.

More than 700,000 Rohingya remain in camps in Bangladesh after fleeing from Rakhine due to Myanmar’s military crackdown in August 2017.

Over 120,000 Rohingya are also confined in camps in central Rakhine where they face restricted freedom of movement and limited access to healthcare and education.

At least six Rohingya candidates who applied to take part in the Nov. 8 polls have been rejected by the Election Commission on the grounds they failed to prove their parents were citizens at the time of their birth under the election law.

A controversial 1982 law states that only ethnic nationalities whose families entered the country before 1823 are entitled to Myanmar citizenship. The Rohingya have thus been denied citizenship and accompanying rights and have restricted access to education and other government services.

Cardinal Charles Bo of Yangon has called on citizens to “choose candidates who will work for peace, empower the voiceless through democracy and ensure economic and environmental justice in a conflict-torn nation.”

“To vote is a birthright. Voting is not only a right but a sacred duty. This is part of our long pilgrimage to democracy,” Cardinal Bo said in an appeal on Sept. 1.

Officials have said they are planning to go ahead with the polls on Nov. 8 though some opposition parties have called for their postponement due to the surge in Covid-19 cases.

Election Commission officials have reportedly said they don’t have a plan to postpone the polls and will increase the number of polling stations from 4,000 to 5,000 to avoid crowding.

Parties have halted campaigning in Yangon, the country’s commercial hub, as it has been under semi-lockdown following the highest number of cases in the region.

The Southeast Asian country had reported 6,959 confirmed cases including 116 deaths and 1,951 recoveries as of Sept. 23.

Around 7,000 candidates from 92 parties are vying for 1,171 seats in the upper and lower houses of the national parliament and in state and regional legislatures in the Nov. 9 polls.

About 37 million people out of the country’s 54 million population are eligible to cast their ballots in the elections.