A student takes part in a demonstration in New Delhi on July 6, 2021, after the Indian rights activist and Jesuit priest Father Stan Swamy, who was detained for nine months without trial under Indian anti-terrorism laws died on July 5 ahead of a bail hearing, officials said. (Photos: Sajjad HUssain/AFP)

The United Nations said on July 6 it was deeply disturbed by the death in pre-trial detention of Father Stan Swamy, an 84-year-old Indian rights activist and Jesuit priest.

Father Swamy, who was detained for nine months without trial under Indian anti-terror laws, died on Monday ahead of a bail hearing.The priest, who campaigned for marginalised tribal communities, was arrested last year for allegedly inciting violence between different Indian castes in 2018.
Donate to UCA News with a monthly contribution of your choice
"We are deeply saddened and disturbed by the death of 84-year-old Father Stan Swamy," Liz Throssell, a spokeswoman for the Office of the UN High Commissioner for Human Rights, told reporters in Geneva.Father Swamy was denied bail despite suffering from Parkinson's disease and other ailments. He was admitted to hospital in May with coronavirus and suffered a cardiac arrest over the weekend.The priest had been detained under the Unlawful Activities Prevention Act (UAPA), which effectively allows people to be held without trial indefinitely.He was suspected by authorities of having links to Maoist militants, an allegation he had denied.Indian Prime Minister Narendra Modi's government has made use of the law to have campaigners, journalists, students and others arrested, in what critics say is an attempt to silence dissent."High Commissioner Michelle Bachelet and the UN's independent experts have repeatedly raised the cases of Father Stan and 15 other human rights defenders associated with the same events with the government of India over the past three years, and urged their release from pre-trial detention," said Throssell.

"The high commissioner has also raised concerns over the use of the UAPA in relation to human rights defenders -- a law Father Stan was challenging before Indian courts days before he died." 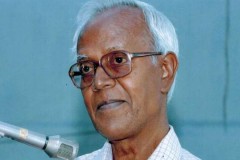 Throssell said that given the severe impact of the Covid-19 pandemic, countries -- India included -- should release everyone detained without a sufficient legal basis, including those held simply for expressing dissenting views.

"We stress, once again, the high commissioner's call on the government of India to ensure that no one is detained for exercising their fundamental rights to freedom of expression, of peaceful assembly and of association," the spokeswoman said.