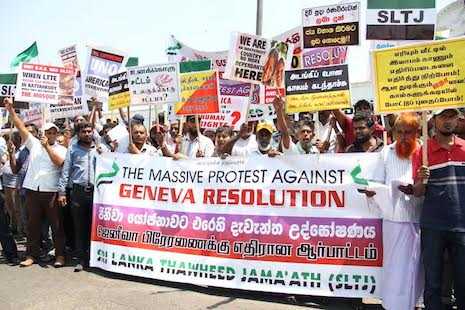 This month, the UN Human Rights Council announced it would defer publication of a major report that investigates allegations of serious human rights violations and related crimes during the last years of Sri Lanka’s civil war. The UN High Commissioner for Human Rights, whose office had been entrusted with the task, had asked the council to delay the report’s release, originally scheduled for March, until September, based on a request by Sri Lanka's new government.

According to High Commissioner Zeid Ra'ad Al Hussein, one of the reasons justifying a deferral was “clear commitments” from the government to cooperate with his office “on a range of important human rights issues”. These commitments were detailed in a letter Sri Lanka's new foreign minister, Mangala Samaraweera, sent to the high commissioner.

First of all, the letter doesn’t state that Sri Lankans are free to cooperate with the UN investigation and gave no assurances that there will be no reprisals for any individuals or groups who do so.

Secondly, the letter says nothing about inviting the UN investigation team to Sri Lanka and creating an enabling environment for such a visit.

Thirdly, there is nothing contained in the letter about the Sri Lankan government sharing information and cooperating with the investigation. In this context, it will be challenging to realize “the possibility that important new information may emerge which will strengthen the report", which was the second reason the high commissioner gave for justifying his request to defer the report’s release.

The new government likely believes that cooperating with the UN investigation would be suicidal for the parliamentary elections expected to be held in June or July. Another reason for reluctance may be the fact that very senior figures in the present government could also be implicated in serious abuses in the final UN report.

The newly elected president, Maithripala Sirisena, has claimed to be the acting defense minister during the final weeks of the war, and the army commander during the last years of the war is now a key political ally of the new government. The new president has declared that he will not cooperate with UN processes for wartime accountability and some of his key ministers have reiterated this.

Hence, it doesn’t surprise me that many Sri Lankans whose families have been killed, disappeared and tortured feel accountability will be shelved forever if the UN process is constantly delayed, and a purely domestic process is set up. Another reason for the lack of confidence in a domestic process is “the history of failed or obstructed domestic human rights inquiries in Sri Lanka”, as the UN High Commissioner himself has noted.

Granted, the current environment in Sri Lanka feels less repressive than it was under Mahinda Rajapaksa’s regime. There have been several positive actions such as the passing of the Victim and Witness Protection and Assistance Act, consultations on the Right to Information Act and the appointment of civilian governors in the North and East. But at the same time, a gazette notification has been issued calling on armed forces to maintain law and order throughout the country, as well as extending a controversial law allowing police to arrest and detain people for up to 48 hours without a warrant in cases where serious crimes are suspected.

Last week, when I was in Batticaloa with a religious group, a colleague who organized a visit for us was questioned by intelligence agencies and another activist from Batticaloa, who went to visit some ex-detainees, got a call from the army asking about the visit. In Mannar, a Tamil ex-detainee was intimidated through phone calls. Two activists from Jaffna, still in hiding after receiving death threats during the Rajapaksa regime, continue to be hounded. These are just some examples indicating that one should not be so naive as to think that the situation has improved everywhere. In this context, building confidence in domestic processes will take time and effort.

Rather than being emboldened by this and engaging the Sinhalese and Tamil population in an objective manner, the government appears to be using the rhetoric of defeated extremist Sinhalese-Buddhist groups, and sadly, the Sinhala-Buddhist population as a whole, as an excuse not to cooperate with the UN investigation and engage with it constructively.

The UN investigation covers allegations of violations and abuses by both parties — meaning the government and the Liberation Tigers of Tamil Eelam (LTTE) — as has been the case with the previous UN report by the Secretary-General's Panel of Experts, related to accountability in Sri Lanka. Also, UN processes in relation to accountability in Sri Lanka have so far been fact-finding and investigative. It's unlikely that there will be an international tribunal for Sri Lanka or that Sri Lanka will be taken up at the International Criminal Court.

The present investigation team's mandate is not to prosecute, but simply “to establish the facts and circumstances of alleged violations, and of the crimes perpetrated, with a view to avoiding impunity and ensuring accountability".

So a key challenge for all those genuinely interested in accountability in Sri Lanka should address is how the findings of this investigative report can inform any future accountability process — domestic or international — and any truth and reconciliation initiatives. These UN reports could contribute substantially to achieving what Pope Francis said was key to reconciliation in Sri Lanka — ensuring that the tragedies of the war are not forgotten.

The UN investigation has become an immensely controversial political issue in Sri Lanka and beyond. This has sadly overshadowed the fact that for many Sri Lankans, especially Tamils, this is a deeply personal and emotional issue — searching for truth and acknowledgment about what happened to their mothers, fathers, sons, daughters, husbands, wives, brothers, sisters, and even extended families and the entire community.

In a recent discussion in Colombo with hundreds of people representing ethnic and religious groups from different parts of the country, a mother stood up and held up the photo of her young son.

“I can't wait 100 days to know where my son is or what happened to him,” she said. “I have already waited for many years.”

Many Sri Lankans like her, from within Sri Lanka and overseas, have taken great effort and risk to give testimony to the UN investigation team as well as previous UN efforts like the Panel of Experts. It would be a mistake to ignore their aspirations and contributions, and look at the report purely as one based on the interests of other states, NGOs, the Tamil diaspora, the media or other groups.

The investigative report may polarize Sri Lankan society and inflame Tamil and Sinhala nationalists. But the long-term answer to this is not to run away from this reality or postpone it, but to engage objectively with local populations, particularly rural Sinhala-Buddhist communities. Not doing so could push some Tamils toward more extreme measures and demands.

As a Sinhalese, I have been involved in discussing the Panel of Experts report and successive Geneva resolutions, with Sinhala-Buddhist communities in rural areas. These have been challenging, yet enlightening, despite the threats it posed at the time. Last year, in the midst of the UN Human Rights Council sessions, I was detained by the Terrorist Investigation Department (TID) and much of the intense interrogation I was subjected to during those days was in relation to my visits to Geneva and my involvement with the UN processes. But it also gave me an opportunity to explain the nature of UN processes and why some victims and their families, including Sinhalese and Muslims, take their grievances to the UN, and one TID officer even said "there is a point in what you say".

These conversations came during the height of the repressive Rajapaksa regime. Surely there is more space to have such conversations now?

The high commissioner appeared to have given serious consideration to the aspirations of victims and their families before his decision to seek a deferral.

“I am acutely aware that many victims of human rights violations in Sri Lanka, including those who have bravely come forward to provide information to the inquiry team, might see this is as the first step towards shelving, or diluting, a report they have long feared they would never see,” he said in his statement announcing the report’s deferral.

The high commissioner emphasized that the deferral is “for one time only” and gave his “personal, absolute and unshakable commitment that the report will be published by September".

Now that the report has been deferred, victims and their families will have to wait. But during this time, they can try to find ways to further strengthen the report. The high commissioner and member states of the UN's Human Rights Council, who agreed to the deferral, have an obligation to strengthen the report. This can be partially achieved by ensuring that the human and financial resources needed for the investigation team to continue its work are provided.

The Sri Lankan government must also tell us its position on the UN investigation. Politicians, journalists and civil society activists should take advantage of the less repressive environment to engage with the report objectively, including local populations who may oppose it. The debate about whether follow-up steps to the UN investigation should be purely domestic, purely international or both, must be discussed internationally. But this is a debate that should happen primarily in Sri Lanka.

Ruki Fernando is a Sri Lankan human rights defender based in Colombo, who travels and works extensively in the North. He is a consultant to the Justice, Peace and Integrity of Creation Commission of the Conference of Major Religious Superiors, member of the Christian Solidarity Movement and Advisor to INFORM Human Rights Documentation Centre.