A special police force patrols in Dhaka in this 2014 photo. The United Nations has criticized Bangladesh for its dismal human rights records including extrajudicial killings and enforced disappearances. (ucanews.com file photo)

The Bangladesh government has come under fire from the United Nations for its dismal human rights performance, a stance supported by a church official.

The March 28 report from the Office of the High Commissioner for Human Rights lambasted the country for high rates of extrajudicial killings, enforced disappearances, muzzling of dissent and free speech and controversial changes to the country's child marriage law.

According to Dhaka-based rights group Odhikar, about 1,300 people were victims of extrajudicial killings and 325 enforced disappearances since 2009.

The U.N. committee also criticized the government for arresting 35 journalists, atheist bloggers and human rights activists in 2016 and urged for the National Human Rights Commission to be empowered to investigate human rights violations in the country.

The report also expressed concerns over controversial changes to country's child marriage law, which allows for the marriage of girls under 18 in "special circumstances." Bangladesh is currently ranked 8th in the global index of child marriages.

"Extrajudicial killings are a serious problem and they are reported by the media almost every day. A culture of denial of justice and lengthy legal process has developed and law enforcers think it is better if they take the law into their own hands," Nokrek told ucanews.com.

"The human rights commission must be empowered because it can't perform independently to investigate and even arrest offenders. Attempts to muzzle dissent by arresting journalists, bloggers and rights activists for political reasons is a major setback to fledgling democracy in Bangladesh," Nokrek said.

"Under no circumstances should the marriage of girls be allowed before 18 because one needs a certain level of physical and psychological maturity before getting married," he said. 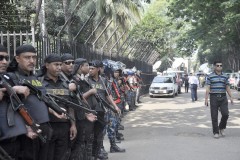 "There is no doubt that law enforcers are involved in extrajudicial killings and disappearances but in recent times we have seen them put on trial, punished and dismissed although the number of small. If we had a strong rights commission, capable of taking disciplinary action, things would have greatly improved," Morshed told ucanews.com.

In an official response, the Bangladesh government said, "the context, realities and limitations of Bangladesh may not have been adequately appreciated in the report's concluding observations."

"Also, the efforts of the government in the implementation of [human rights] provisions in Bangladesh might not have been recognized enough," said the response from the Bangladesh Mission in Geneva, on behalf of the Ministry of Foreign Affairs.