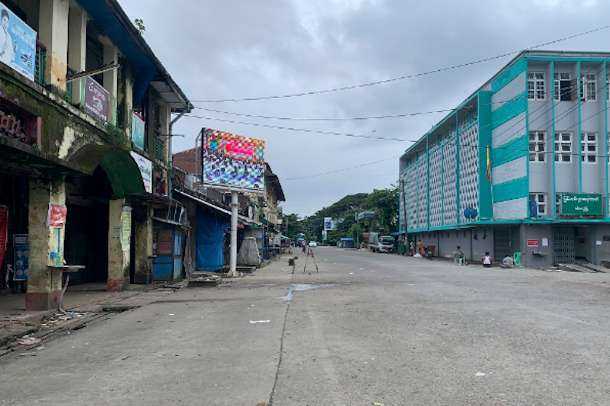 The main street of Sittwe, capital of Rakhine state, remains deserted on Aug. 23 during a lockdown to stem the spread of the coronavirus. (Photo: AFP)

The United Nations has called on Myanmar’s government to restore full internet service in Rakhine state to enable access to accurate information about the risks of Covid-19.

“Access to timely and accurate information about the risks of Covid-19 as well as preventive measures is essential to ensuring people’s safety,” Ola Almgren, UN resident and humanitarian coordinator in Myanmar, said on Sept. 1.

“Nowadays, the general population actively seek this information on mobile internet, therefore access to functional internet that allows applications to run on mobile phones is essential and full internet service must be restored in areas currently not having such service.

“The recent surge in Covid-19 cases in Rakhine complicates the provision of ongoing humanitarian assistance and protection services to more than 670,000 vulnerable people by the UN and its partners.

“We are working with the government to ensure that measures aiming to reduce the speed of local transmission in Rakhine take account of and don’t inadvertently impede the humanitarian efforts on which many people in Rakhine depend.”

The government first imposed an internet blackout in nine townships in Rakhine and Chin states in June 2019 and it was temporarily lifted in some areas in September 2019. The government reimposed the restrictions again on Feb. 3. They were removed in Maungdaw township on May 2, leaving eight townships still under restrictions.

The government allows only 2G data networks while 3G and 4G services remain blocked. The 2G speed is slower and does not allow services on mobile phones such as video calls or access to web pages with photos and videos.

Rights groups have called on the government to restore full internet access in Rakhine and Chin states as the region is reeling from the spikes in Covid-19 cases.

Sittwe, capital of Rakhine, has become a hotspot and the contagion has spread to several townships in the region with over 400 cases reported in the past two weeks. The recent surge in local transmissions in Rakhine includes UN staff and NGOs.

Almgren also called for a cessation of hostilities to enable safe and unimpeded access to all communities in need of assistance as the UN reiterates its call on parties to the conflict to heed the UN secretary-general’s call for a global ceasefire.

“Access to communities in need in northern Rakhine and southern Chin states has also been curtailed due to the ongoing armed conflict in this area,” Almgren said.

Over 86,000 people were displaced in Rakhine and Chin states due to a 20-month conflict between Myanmar’s military and the Arakan Army.

No Covid-19 cases had been reported in camps or sites for internally displaced people as of Aug. 31, according to the UN report on Sept. 1.

As of Sept. 2, Myanmar had reported 938 confirmed cases including six deaths and 357 recoveries, according to health officials.