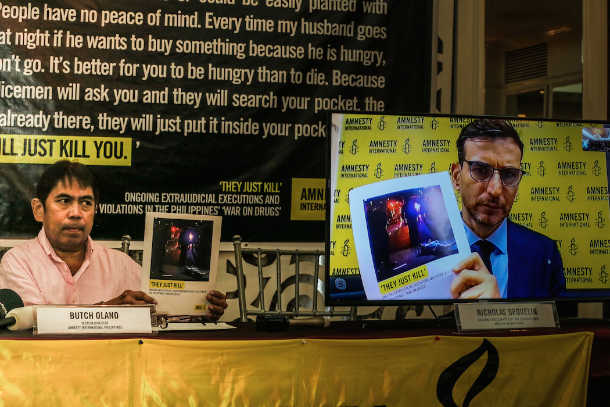 Amnesty International has called on the United Nations to investigate what it called a "large-scale murdering enterprise" in the guise of the Philippine government's war on drugs.

In a report titled "They Just Kill," released in Manila on July 8, the rights group called on the U.N. Human Rights Council (UNHRC) to immediately investigate the killings. The London-based organization also appealed to other governments to "use all diplomatic and political tools ... to put pressure on the Philippines to immediately end all crimes."The report noted that extrajudicial killings remain rampant and the scale of abuses has reached the "threshold of crimes against humanity.""Within marginalized communities, police continue to kill with total impunity, fueling a pervasive climate of fear in cities, towns and neighborhoods," the report said."The reliance on violent and repressive policies continues to perpetuate human rights violations and abuses." Philippine authorities have admitted that about 6,600 suspects have been killed in 153,276 anti-drug operations across the country in the past three years. Police claimed that most resisted arrest or fired on arresting officers.Human rights groups, however, claimed that the death toll has been much higher, with cases of extrajudicial killings unreported, especially in the provinces."[The] war on drugs continues to be nothing but a large-scale murdering enterprise for which the poor continue to pay the highest price," said Nicholas Bequelin, Amnesty International’s regional director for East and Southeast Asia."It is time for the United Nations, starting with its Human Rights Council, to act decisively to hold President Duterte and his government accountable."

The Philippine government dismissed Amnesty’s report, saying the organization is politicizing the alleged extrajudicial killing cases."There is bias. There is prejudice," presidential spokesman Salvador Panelo said in a press briefing after the report’s release."They keep calling for an investigation. The fact remains that the basis for their call is actually wrong. They are saying that there have been murders, as if all those killed were intentionally slaughtered or killed by policemen." Panelo said the killings were the result of legitimate police operations. He also claimed that international human rights groups accept false reports and false narratives from the administration’s opponents.Amnesty International maintained that Philippine authorities have failed to credibly investigate and prosecute those responsible for the killings.It added that the Philippine government has "evaded all attempts to scrutinize human rights violations committed in the context of its widely criticized war on drugs."In February last year, the International Criminal Court launched a preliminary examination into the killings, but President Duterte withdrew from he court.Earlier, at least 28 nations asked the UNHRC to address alleged human rights abuses in the Philippines. The resolution submitted by Iceland called on High Commissioner on Human Rights Michelle Bachelet to produce a comprehensive written report on the situation in the Philippines.Manila dismissed Iceland’s call as intruding on the country’s sovereignty.Amnesty expressed concern over the Philippines’ attempts to try and "thwart accountability for extrajudicial executions and other human rights violations."The group said the drug-related killings were deliberate and systematic and appeared to be part of a government-orchestrated attack against poor people.It said the killings could constitute crimes against humanity, which are defined as "widespread and systematic attacks directed against any civilian population."Butch Olano, director of Amnesty's Philippine section, noted that recent killings have not been reported."Fear permeates all corners of Philippine society," he said, adding that the lack of documentation contributed to the "perception that there are not as many victims as before."