Protesters march with banners and flares as they take part in a demonstration against the military coup in Yangon on June 26. (Photo: AFP)

A United Nations investigator has strongly condemned the Myanmar military’s widespread and systematic attacks against civilians, especially women and children, as well as other serious violations of human rights since the Feb. 1 coup.

She said these reports of sexual violence may amount to “violations of international criminal law” for those who commit, command or condone them.

“The patterns of sexual violence perpetrated by the Tatmadaw [military] against women from ethnic and religious minority groups, as well as against individuals on the basis of their sexual orientation and gender identity, as documented by the UN Fact-Finding Mission on Myanmar, is extremely worrying,” Patten said.

She has urged the Tatmadaw to cease all acts of sexual violence with immediate effect, which it is required to do following its listing in 2017 and pursuant to UN Security Council Resolution 2106 (2013).

She also recalled that a joint communique to address and prevent sexual violence in conflict was signed between the then government of Myanmar and the UN in December 2018.

“The emerging reports of sexual violence in detention settings are very disturbing. I call for an end to all forms of violence against women, as well as unimpeded access to independently investigate the alleged reports,” Patten stressed.

She also raised concerns over the political turmoil that has disrupted health and social services as many organizations have been shut down due to fear of being attacked or looting.

“In the midst of this civilian suffering, and the ongoing Covid-19 pandemic, it is essential that appropriate multisectoral services are available to all civilians including non-discriminatory care for survivors of sexual violence, and unimpeded access for humanitarian actors to provide essential lifesaving services,” Patten said.

At least 881 people have been killed and more than 5,000 detained since the military seized power after toppling the elected civilian government. 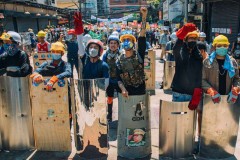 Women have reported sexual violence and other forms of gendered harassment and humiliation from police and military officials since the coup, according to rights groups.

In its report to the Human Rights Council in 2018, the UN Fact-Finding Mission said that “rape and other sexual violence have been a particularly egregious and recurrent feature of the targeting of the civilian population in Rakhine, Kachin and Shan states since 2011.”

Cardinal Charles Bo of Yangon has appealed to citizens to continue prayers to end violence and hatred in the beleaguered country.

“Let there be no more death, no more mourning, no more crying or pain. Enough of violence, enough of hatred. Violence and hatred has brought only non- stop bleeding, as the woman in the Gospel suffered for decades,” he said in a homily on June 27.

“This country had violent bloodletting for seven decades. Let us, as a nation, touch the garment of healing and be totally healed.

Nobody deserves the violence, torture, incarceration and death that our country has witnessed for the last four months

“Let not our streets be filled with the blood and hemorrhage of hatred. Let us all — the army, the civilian government, the people — rise up from the culture of death and dance with the joy of freedom, hope, peace and prosperity.

“Nobody deserves the violence, torture, incarceration and death that our country has witnessed for the last four months.”

Cardinal Bo, president of the Catholic Bishops’ Conference of Myanmar, also called for prayers for the thousands of people in desperate need of food, medicine and shelter.

“More than 200,000 people have become displaced. We need prayer but urgently we need to share, as St. Paul says, out of our abundance,” he said.