Women hold a protest march in the town of Baloi, in Lanao del Norte province, to demand aid for people affected by the conflict in Marawi. (Photo by Divina Suson)

The United Nations Office for the Coordination of Humanitarian Affairs estimated that at least US$43.7 million worth of food and supplies are needed in the first quarter of the year.

On Jan. 9, about 40 displaced families living in tents in the village of Pacalundo in Baloi staged a protest march to the town center.

They complained of hunger, overcrowding and a lack of privacy in their shelters set up by local organizations.

Acmilah Taguranao, 39, complained that the distribution of food and other aid by the government's social welfare office has not been fair.

"Why is it that they prioritize those in government evacuation centers? We also need help," Tagurano told ucanews.com.

She said repeated complaints have been ignored.

At least 400,000 people were affected by the conflict, which started on May 23 last year when Islamic State-inspired gunmen attacked and occupied the city.

The ensuing five-month conflict killed more than 1,000 people, according to the Philippine military. 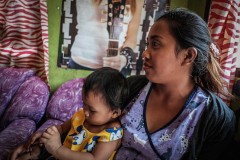 Fight's not yet over for families of Marawi's missing As of December, government and international aid agencies were able to facilitate the return of 26,000 families to Marawi following the end of military operations on Oct. 23.

The government has so far built 800 transitional shelters for displaced people but authorities said reconstruction work will only start in the second quarter of the year.

"A significant number of people will continue to rely on humanitarian assistance," said Mark Bidder, head of the UN humanitarian affairs office.

Many of those who earlier returned to Marawi have gone back to evacuation centers after finding their homes destroyed and looted. They also said there are no livelihood opportunities in the ravaged city.

Zorayda Acmad, a 21-year pregnant mother of five, said she joined the protest march "for the sake of my children who have nothing to eat."

"We are already tired," she said, adding that the last time she received a box of relief goods from the government was on Dec. 3.

The government's social welfare office resumed distribution of relief goods on Jan. 8 but these are not enough for people, Acmad said.

She said those who sought shelter in remote villages were dependent on the generosity of farmers and some village officials.

"Give us food to at least feed our children," said Acmad.

An estimated 77,175 families were displaced by the war, according to the International Organization for Migration. At least 9,500 families in 24 villages in the main battle area lost their homes.

Bishop Edwin dela Pena of Marawi has called on Catholic dioceses across the country to adopt communities affected by the war and to assist in long-term recovery efforts.

Father Edwin Gariguez, head of Caritas Philippines, said each affected community needs at least an initial fund of US$1,500 dollars that will be used to buy rice, hygiene packs, peace education kits, and tools for a psycho-social programs.