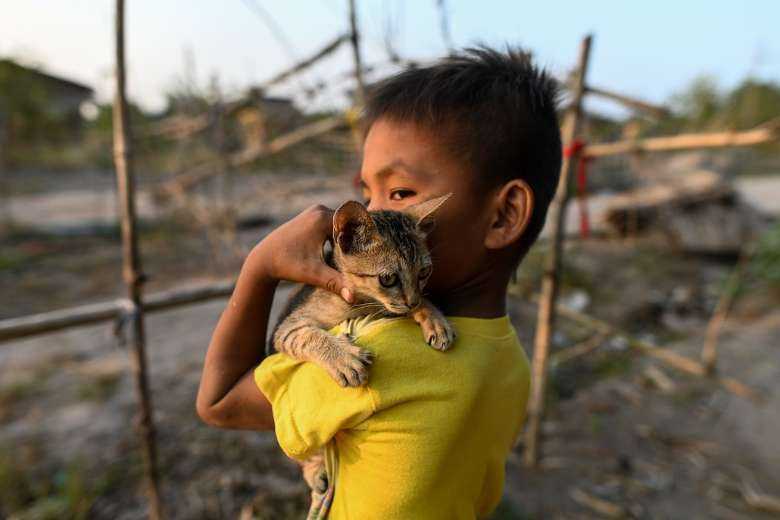 A Chin child plays with his cat in Bethel village in Hmawbi on the outskirts of Yangon, where hundreds of members of the Chin community have settled after being displaced by fighting between Myanmar's military and the Arakan Army. (Photo: AFP)

It is the third time for Myanmar, which is one of the 14 states to be reviewed by the UPR Working Group during its latest session from Jan. 18-29.

The first and second UPR reviews of the Southeast Asian nation were in January 2011 and November 2015.

Ahead of the UPR review, UN member states have urged the government of Myanmar to protect civic freedoms as it continues to violate rights and escalate attacks on democratic freedoms.

In a joint submission by CIVICUS, Free Expression Myanmar and Asia Democracy Network to the UPR cycle, they assessed the implementation of the recommendations made by the UN five years ago and compliance with international human rights laws and standards.

The submission found that since 2015 authorities have perpetrated serious human rights violations and escalated attacks on democratic freedoms.

The groups said the government has continued to use restrictive laws to arrest and prosecute human rights defenders, activists, journalists and government critics for the peaceful exercise of their freedom of association and expression.

Artists from the Peacock Generation poetry troupe remain in jail following their arrest in 2019 for allegedly criticizing the military in a satirical performance that was livestreamed on Facebook.

Furthermore, an internet blackout remains in parts of Rakhine and Chin states and the government has also silenced those critical of the shutdown.

David Kode, advocacy and campaign lead at CIVICUS, said states must take the opportunity of Myanmar’s UPR to hold the government to account for violations.

“Myanmar has not adequately delivered on the human rights commitments it made during its last cycle and those on the ground being persecuted for demanding reforms, for reporting on atrocities or simply for expressing dissent, need support from the international community,” Kode said in a statement.

The groups said Myanmar committed in its last UPR to take concrete steps to protect the right of peaceful assembly but restrictions on peaceful protests remain in law and in practice.

Arbitrary arrest and prosecution of protesters have been widespread, while authorities have used excessive force and firearms to disperse protests against government policies and in land disputes with businesses.

More egregiously, gross human rights violations against the Rohingya in Rakhine state continue. Since 2016, both military and civilian authorities have denied access or imposed restrictions on access for civil society organizations providing humanitarian aid to Rakhine including shelter, food and protection.

The groups recommended the repeal or review of all criminal defamation laws including section 66(d) of the 2013 Telecommunication Law and 2014 Unlawful Association Act and amendment of the peaceful assembly and peaceful procession law as well as guaranteeing the full civil and political rights of the Rohingya and other minorities.

The UPR is a process, in operation since 2008, which examines the human rights records of all 193 UN member states every four and a half years. The review is an interactive dialogue between the state delegation and members of the Human Rights Council and addresses a broad range of human rights topics.