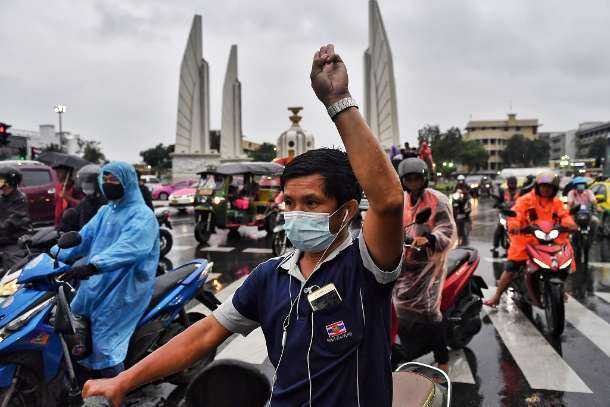 A motorcyclist gives the three-fingered salute as he rides past the Democracy Monument during a demonstration in Bangkok on Oct. 13. (Photo: AFP)

The ultraconservative backlash against prominent opposition politicians in Thailand has acquired racist overtones in what many observers see as an increasingly fraught political scene.

Most recently, Thanathorn Juangroongruangkit, a prominent progressive politician, has come in for racist abuse as members of an ultraroyalist group called the Center for People Protecting the Monarchy have questioned his loyalty to Thailand by pointing out his ethnic Chinese ancestry.

“[People like you] have never sacrificed your flesh and blood for the sovereignty of Thailand,” said a female member of the group during a rally on Oct. 12 in front of a Bangkok-based company owned by the politician’s family in remarks aimed at the young politician, who is 42.

“If you like Western-style democracy, go and live there,” the woman added in a clear dig at Thanathorn’s reformist policy proposals, which include placing limits on the political and financial influence of the country’s influential monarchy.

The protest’s organizer, who was identified as Chakrapong Klinkaew, likewise called on Thanathorn to leave Thailand. “If you think there’s nothing good about Thailand, we shall unite to force you out of Thailand,” Chakrapong said.

Ironically, many of the ultraroyalists in Thailand who are opposed to any democratic reforms are themselves of ethnic Chinese heritage.

In years past prominent Thai-Chinese protest leaders of the “yellow shirt movement,” named for their attire which they adopted after the color associated with the king of Thailand, dismissed ethnic Thai farmers on the other side of a political divide as uncouth and uneducated.

In fiery speeches they likened these farmers to buffalos, a grave insult in Thailand.

Thanathorn, a businessman turned politician whose widely popular Future Forward Party was dissolved by a court on a technicality earlier this year in a highly controversial decision, is the descendant of Chinese immigrants. His family has prospered financially and Thanathorn himself is a billionaire.

In a statement read out in public, members of the Center for People Protecting the Monarchy accused him of being ungrateful to the Thai royal family, who they said had welcomed migrants like his family into the country and allowed them to become rich.

Name calling has long been common in Thai politics. Most of the barbs are directed at young liberal politicians who have been calling for democratic reforms in a country that has been ruled by a military-allied government since 2014 when the Royal Thai Army ousted an elected government in a coup.

Another popular target of abuse from ultraconservatives is Pannika Wanich, a spokeswoman of the now defunct Future Forward Party who remains active in the ongoing pro-democracy campaign.

Pannika, 32, has routinely been mocked and derided over her outfits in what her defenders have described as sexist attacks.

“They effectively devalue and reduce me to a fashion icon more than an MP,” Pannika told a foreign newspaper last month.

Yet she stressed that the best way to counter such verbal abuse was to carry on. “The most powerful action against this harassment is speaking out and not to be silenced,” Pannika said.

“And I ask all female protesters and student leaders to do the same, to not be afraid, to continue speaking out, to not be ashamed,” she added, referring to the largely youth-led pro-democracy rallies that have been taking place regularly since July and many of whose leaders are young women.