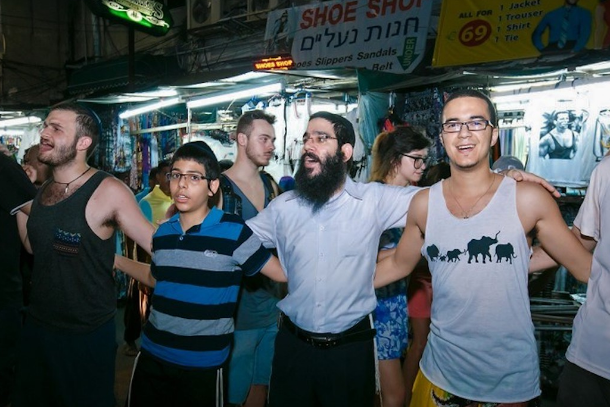 An emissary of the ultra-Orthodox Chabad-Lubavitch movement (second from right) celebrates during a Jewish holiday with Israeli travelers on Bangkok's Khao San Road. (Photo courtesy of Chabad of Thailand)

But these ultra-Orthodox Jews, who belong to the Chabad-Lubavitch movement, aren’t here to mingle in the psychedelic, happy-go-lucky cavalcade where techno music blares from loudspeakers at myriad curbside bars. They are here on a spiritual mission.

That mission, says Rabbi Nechemia Wilhelm, a Hasidic Jew from Jerusalem, is to provide “a home away from home” for Jewish travelers, especially young Israelis, tens of thousands of whom pass through Bangkok each year during their journeys around Southeast Asia.

That home is Chabad House on Khao San Road, which has been overseen by Wilhelm, who is in his late 40s, for more than two decades. The multistory establishment boasts a kosher restaurant and a sizeable synagogue.

“In Israel I don’t normally go to shul [synagogue],” attests a young Israeli backpacker who identifies himself by his first name of Oren. “But here in Thailand I come here to meet up with other Israelis and get a taste of home,” he adds, indicating the Israeli fare on the menu in the restaurant.

Most of the patrons at Chabad House are secular Jews like Oren, who has just arrived in Bangkok from India and will soon be off to Vietnam via Cambodia.

Yet Wilhelm and his fellow Chabadniks do not proselytize to them.  At most the ultra-Orthodox Jews might ask their less religious brethren to put on tefillin (small leather boxes with sacred scrolls in them), which observant Jews wear daily for prayer as a sign of their spiritual dedication.

“We are here because of the Rebbe,” Wilhelm explains. “He instructed us to be everywhere Jews are.”

He’s referring to Menachem Mendel Schneerson, known to his followers simply as the Rebbe (teacher or mentor), a venerated American rabbi who was considered a spiritual giant in the ultra-Orthodox Hassidic movement.

As leader of the Chabad-Lubavitch sect based in Brooklyn, New York, Schneerson embarked on a quest to revitalize Jewish life and spirituality worldwide shortly after the Holocaust. He did so by sending young husband-and-wife teams as his emissaries all around the planet to set up local Jewish centers from scratch. The rabbi instructed his shluchim (messengers) to reach out to local Jews wherever they were in order to create communities, large and small.

In the process, he turned a once highly insular religious movement into an outgoing, socially active one.

“Each individual has the capacity to build communities and endow communities with life,” Rabbi Schneerson told his followers. “Every community member becomes a source of inspiration.” Rabbi Menachem Mendel Schneerson, known popularly as the Rebbe, was a revered leader of the Chabad-Lubavitch movement, which now caters to the spiritual and other needs of Jews worldwide. (Photo from Wikimedia Commons)

Schneerson, who was the seventh and so far last leader of the Lubavitch Hasidic movement, which he led for four decades, died at 92 on June 12, 1994. His graveside in Queens, New York, draws hundreds of thousands of reverential visitors from around the world each year.

In marking the 25th anniversary of the Rebbe’s passing, which in the Hebrew calendar fell on July 6 this year, Ephraim Mirvis, chief rabbi of the United Kingdom and the Commonwealth, called Schneerson “one of the great rebuilders of Jewish life after the tragedy of the Shoah.”

“The Rebbe’s teachings and insights remain as fresh and relevant today as they have ever been,” Mirvis argued in a Facebook post. “[His] pioneering vision for Jewish outreach and pride, conveyed with his trademark unconditional love, has outlived him, and his legacy remains stronger than ever.”

That certainly seems to be the case. A quarter of a century after Schneerson’s death, his emissaries like Wilhelm are as busy as ever carrying out his Jewish revivalist project far and wide.

In Thailand alone, there are five Chabad centers: two in Bangkok, two in the country’s south (on Samui and Phuket islands), and one in Chiang Mai in the hilly north. Elsewhere in Southeast Asia, Chabad runs missions in Laos, Cambodia, Vietnam and Singapore.

Local Chabad emissaries routinely assist their fellow Jews in various ways, including finding medical help in the case of emergencies and visiting Jewish inmates in prisons. Chabadniks serving in the region have helped out after natural catastrophes like the 2004 Indian Ocean tsunami and helped save travelers who ended up suffering the consequences of tropical diseases, road accidents or venomous snakebites.

They also arrange for proper burials for Jews who pass away far away from home or without known next of kin.

Just like many Catholic missionaries, Chabad emissaries, who routinely take up their assigned posts worldwide with their newlywed wives after completing their rabbinical training, expect to stay in their posts for life — or until the Moshiach, Jews’ prophesized messiah, arrives and relieves them of their duties by ushering in redemption.

Because of their distinctive garb, Chabad emissaries can be at risk of being attacked in countries where Islamist extremism remains a threat.

In November 2008, Rabbi Gavriel Holtzberg and his pregnant wife, Rivka, were brutally murdered along with four other people at Chabad House in Mumbai when members of Lashkar-e-Taiba (Army of the Righteous), a Pakistani extremist group, carried out several deadly terror attacks against high-profile targets around the Indian city, including hotels, a bus station and a hospital.

Nor are Lubavitchers welcome everywhere — or at least not by everyone.

One afternoon during a visit to Luang Prabang, a ucanews.com reporter witnessed a middle-aged Frenchman who runs a restaurant railing loudly at a young Chabadnik, who had just moved with his wife to the historic town in northern Laos to start up a new Chabad House there.

“Go away and don’t come back,” the Frenchman told the Jewish man, who turned on his heels and left without a word or backward glance.

“I don’t have anything against Jews,” the restauranteur protested when the reporter enquired what the fuss had been about. “But he was bothering my customers.”

The Chabad rabbi, a soft-spoken, bookish-looking fellow, insisted he had meant to do no such thing. “I just wanted to know if there were any Jews around so that we could have a minyan,” he explained, referring to the quorum of 10 Jewish men required by Jewish law for certain communal prayers.

As he was legging it back to his Chabad House for evening prayer, the emissary made light of the incident. “I didn’t want to cause any problems,” he said. “It was a misunderstanding.”

Then he smiled. “Would you like to have dinner with us?” he invited the reporter. “You’re welcome to drop by any time.”