After two weeks of violence, some 400,000 people have fled to Myanmar's Rakhine State for Bangladesh

Rohingya refugees stranded at Bangladesh side of the border at Bandarban district after fleeing deadly violence in Rakhine State of Myanmar on Aug. 25. (ucanews.com photo)

This has led to an ever-worsening crisis that has resulted in mass numbers of Rohingyas fleeing to Bangladesh and growing allegations by international aid groups, now blocked from the region, of ethnic cleansing.

The current crisis in Rakhine State began after a series of coordinated attacks on 30 police posts and an army base by a group now known as the Arakan Rohingya Salvation Army (ARSA) on Aug. 25 which resulted in a surge of rhetoric against Muslims.

U Parmaukkha, a Yangon-based nationalist monk, said the ARSA attacks revealed the real agenda of those he described as "Bengalis," the term most people in Myanmar (also known as Burma) use to describe the persecuted Muslim minority, implying they are from neighboring Bangladesh despite them living in the region for centuries.

The monk told ucanews.com that the militants are attempting to take land in the Mayyu mountain region situated near Maungdaw district, northern Rakhine, the area worst hit by the violence.

"We have already raised our concerns that we need to protect our race and religion as a rapidly growing population of Muslims in northern Rakhine could swallow the minority ethnic Rakhine," said U Parmaukkha, a former member of hard-line Buddhist group Ma Ba Tha which recently rebranded itself as the Buddha Dhamma Parahita Foundation.

Nationalist groups such as the Buddha Dhamma Parahita Foundation push the idea that the Rohingya pose a threat to Myanmar's sovereignty. Myanmar's citizens and Buddhism needs to be protected from Islamization, they say. Many local Buddhists, ethnic Rakhine people, also fear that Rohingya will take their land as their population grows.

U Parmaukkha said Myanmar must stick to a 1982 citizenship law enacted by the former repressive military junta that still controls the military and borders that states only ethnic nationalities whose families entered the country before 1823 are entitled to Myanmar citizenship. Through the law, the Rohingyas have been denied citizenship, accompanying rights and been marginalized in access to education and other government services

Kyaw Min, chairman of Yangon-based Rohingya party Democracy and Human Rights, said the Rohingya have been living in Rakhine State for several centuries and that they are not illegal immigrants.

"The main goal of Rakhine nationalists is that Rakhine State must be for only Rakhine tribes so they have made their propaganda that Rohingya are illegal people and came from Bangladesh," Kyaw Min told ucanews.com. 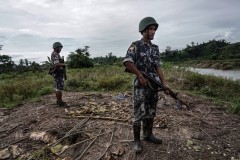 Hundreds of Rohingyas fleeing to Bangladesh turned away at border The Rohingya leader was very concerned about the ongoing crisis that rights groups have described as ethnic cleansing. Kyaw Min said the attacks by ARSA has legitimized for many in Myanmar the need for the Myanmar military to conduct clearance operations which has led to about 400,000 Rohingya fleeing to neighboring Bangladesh since the violence erupted.

Human Rights Watch has said that initial investigations of the current situation in Rakhine State are indicative of an ethnic cleansing campaign.

"Ethnic Rohingya Muslims fleeing Burmese security forces in Burma's Rakhine State have described killings, shelling, and arson in their villages that have all the hallmarks of a campaign of 'ethnic cleansing,'" said HRW on Sept. 8.

The U.N. rights agency has said as much as well, saying it was a "textbook example of ethnic cleansing."

The Myanmar government denies such claims. It has said that in the operations more than 400 people have been killed, mostly so-called Rohingya militants. The U.N. on Sept. 8 said more than twice that amount have been killed.

The government also said that more than 27,000 ethnic Rakhine and Hindus have been internally displaced by the crisis.

Pe Than, a lower house lawmaker from the hard-line Buddhist party the Arakan National in Rakhine State, said he is worried for the safety and security of ethnic Rakhine who have fled their homes from militant attacks.

Pe Than, an ethnic Rakhine, said that Muslims are about 90 percent of the population in the northern Rakhine region. "We could lose our sovereignty if we don't control the birthrate of the Muslim population," he told ucanews.com.

"The situation is very risky and the region could be a dangerous place if the militants have networks with the terrorist group the Islamic State," said Pe Than.

The ARSA militant group declared a temporary cessation of their military operations Sept. 9 for a one month period to allow humanitarian aid into affected areas.

They called on the Myanmar government to do the same. Government spokesperson, Zaw Htay responded saying they do not negotiate with terrorists.

"While dynamics at play in Rakhine are mostly driven by local fears and grievances, the current crisis has led to a broader spike in anti-Muslim sentiment, raising anew the specter of communal violence across the country that could imperil the country's transition," warned the ICG in a report released Sept. 5.

Violence in Rakhine State during 2012 left more than 200 people dead and forced tens of thousands — mostly Rohingya — to flee their homes. An estimated 140,000 people in the state still live in temporary camps for displaced people. Prior to the current crisis, there were an estimated 1.1 million Rohingya living in Rakhine.