Ukrainian, Russian women hold cross together at Rome's Via Crucis

The Way of the Cross, presided over by Pope Francis, returned to Rome's Colosseum after two years of Covid restrictions 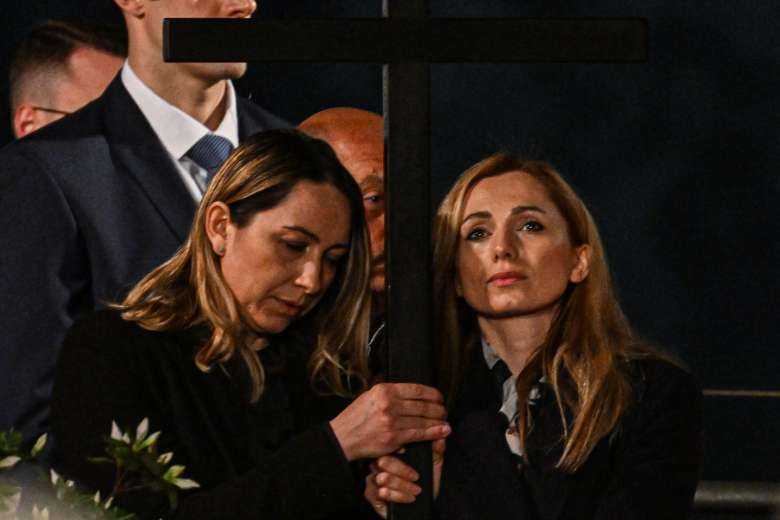 Ukrainian nurse Iryna and Russian nursing student Albina, who are friends, hold a cross at the 13th station as Pope Francis leads the Way of the Cross outside the Colosseum in Rome on April 15. (Photo: AFP)

More than 10,000 people gathered outside Rome's Colosseum prayed with Pope Francis for peace in the world, while a Ukrainian and a Russian woman held a cross together during the nighttime Way of the Cross on April 15.

The pope had asked families to write the series of prayers and reflections for the 14 stations based on their actual experiences carrying difficult "crosses" in life, such as the loss of a family member, infertility, illness and disability as well as migration, but who also seek hope in their faith.

The 13th station — Jesus dies on cross — had reflected on the tragedy of death, loss and war with a reflection written by a Ukrainian and a Russian family.

The meditation, which was published a few days before the event, said that they see "Death everywhere" and families ask, "Where are you, Lord? ... We want our life back as before ... What wrong did we do? … Why did you break up our families like this?"

"We know that you love us, Lord, but we don't feel this love, and it drives us to desperation," the written meditation said, ending with an appeal that God "teach us to be peacemakers, brothers and sisters, and to rebuild what bombs tried to destroy."

That meditation was changed after some controversy when the meditations were published.

"I am certain that neither the Ukrainian people nor the Russian people want this war. Everyone wants a normal life"

Archbishop Sviatoslav Shevchuk, major archbishop of the Ukrainian Catholic Church, asked Pope Francis to scrap plans to have a Ukrainian woman and a Russian woman carry the cross together during the pope's Way of the Cross service, saying April 12 that he thought the idea "untimely, ambiguous and such that it does not take into account the context of Russia's military aggression against Ukraine."

The new meditation read April 15 called for a moment of silence: "In the face of death, silence is more eloquent than words. Let us pause in prayerful silence and each person pray in their hearts for peace in the world."

However, the cross was still held by a Ukrainian and a Russian. The two women met and became friends while studying nursing and working at a Rome medical university campus. They had told Vatican News April 11 that such friendships were common and many families are made up of the two nationalities, living in both or either country.

The war "is a tragedy that hits both people. I am certain that neither the Ukrainian people nor the Russian people want this war. Everyone wants a normal life," said Iryna, who is from Ukraine.

The Way of the Cross, presided over by Pope Francis, returned to Rome's Colosseum after two years of restrictions due to the COVID-19 pandemic.

The pope offered a final prayer at the end of the service, saying, "Take us by the hand, like a father, lest we stray from you. Turn our rebellious hearts to your own heart, so that we may learn to pursue plans of peace."

"Inspire adversaries to shake hands, and taste mutual forgiveness. Disarm the hand of brother raised against brother, so that where there is hatred, concord may flourish. Grant that we never act as enemies of the cross of Christ, so that we may share in the glory of his resurrection," he said.

Earlier in the day, the pope presided over the Liturgy of the Lord's Passion, which commemorates Christ's passion and death on the cross.

The pope began the rite after a silent procession down the central nave, where he stood in silent prayer before the main altar. Customarily, he would have knelt to lie prostrate on the floor in prayer, a sign of adoration and penance; however, he has been having ongoing difficulty with his knee.

During the veneration of the cross, after the homily, the pope wore a red chasuble and prayed in silence before kissing the cross and then holding it aloft for veneration. Because of safety measures in place to limit the spread of the virus that causes COVID-19, the cross was then placed before the main altar for veneration from the pews, without people processing before the cross to genuflect and kiss Christ's feet.

Following tradition, the homily was delivered by Cardinal Cantalamessa, preacher of the papal household.

The papal preacher said Jesus invites everyone to repent and to turn swords into plowshares and missiles into factories and homes.

"This year we celebrate Easter not to the joyful sound of bells but with the noise in the ears of bombs and explosions not far from here," Cardinal Raniero Cantalamessa said during the liturgy.

"There is only one way to escape the current of time that drags everything with it: to pass on to that which does not pass," that is, the promise and truth of Jesus Christ, the source of salvation, he said in his homily during the April 15 service in St. Peter's Basilica.

Today, some believe there is no truth or certainty, others believe "there is too much injustice, too much suffering in the world to believe in God," the cardinal said.

But think "how much more absurd and hopeless the evil that surrounds us becomes without faith in a final triumph of truth and good," he said.

The Vatican also released a transcript of an interview televised on a religious program aired earlier in the day on RAI, the Italian television station.

In the interview, Pope Francis said he understands why governments buy weapons, but "I do not justify them."

That nations have to defend themselves is what the mindset of Cain who killed his brother. "If there were a pattern of peace, this (need for defense) would not be necessary."

People speak about peace, he said, and "The United Nations has done everything possible, but they have not succeeded. I go back to Calvary. There, Jesus did everything. With mercy, with goodness, he tried to convince the leaders, but no: war, war, war against him!"

He said he prays every morning to St. Michael the Archangel "so that it might help me conquer the devil."

He said, "I am afraid of him, this is why I have to defend myself so much. The devil was the one who did all that maneuvering so that Jesus would end up like he did, on the cross. The powers of darkness over Jesus: 'This is your hour,' the powers of darkness."