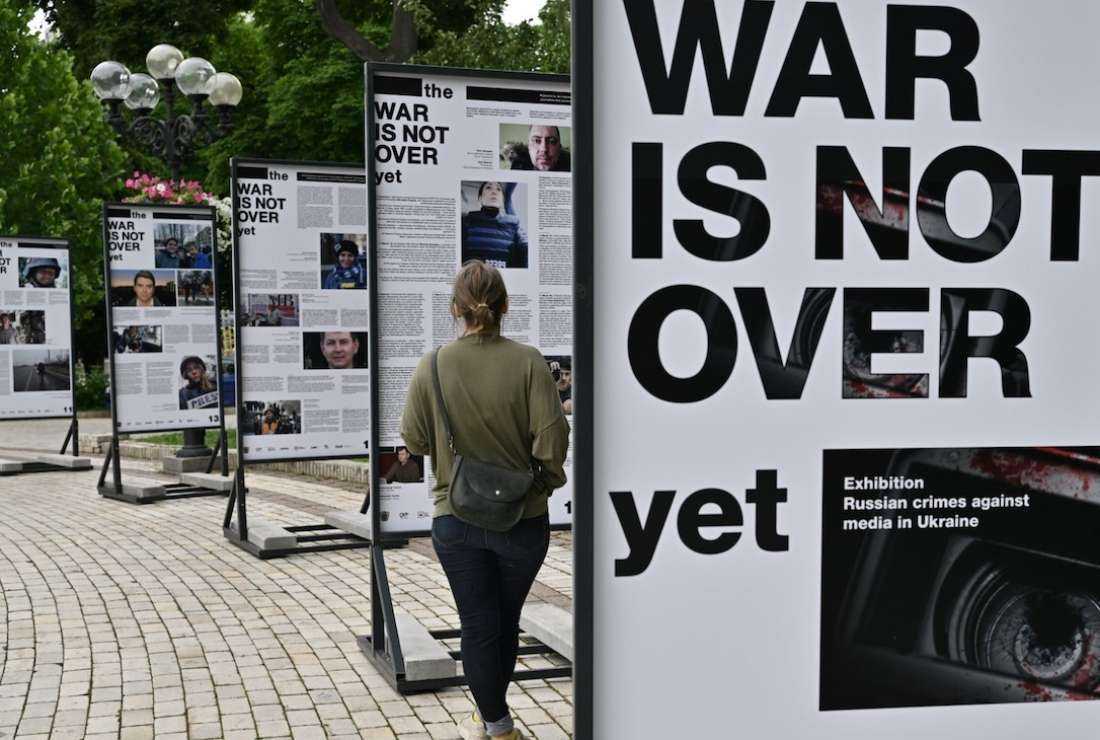 A woman visits the 'The war is not over' photo exhibition opened in Taras Shevchenko Park in Kyiv on June 23 amid Russia's invasion of Ukraine. (Photo: AFP)

Hundreds of Koreans who have returned from war-torn Ukraine have started new lives in South Korea with assistance from the government and community groups.

About 300 Ukrainian Koreans including elderly, women and children have found shelter at the Koryoin Village in Gwangju, the sixth-largest city in the East Asian country.

Some 418 Koreans had returned home from Ukraine as of June 19, reported Korean news agency Dong-A Ilbo.

"With the support of the citizens, a miracle has happened," Cheon-young, the principal of Saenal School, told Dong-A Ilbo.

Following the Russian invasion of Ukraine, local communities in Korea stepped in to support the repatriation of Koreans.

Jeon Olga, CEO of the Koryoin Village Family Café, reportedly donated initial funds of 10 million won (US$7,700). This was followed by donations from various groups ranging from 10,000 won to 100,000 won.

The Koryoin Village has secured total funding of 440 million won to help Koreans who are still trying to return from Ukraine.

“South Koreans have shown great consideration for these people who are fleeing a war-torn country,” Shin Jo-ya, the head of Koryoin Village, told The Korea Herald.

The facility is sheltering about 7,000 ethnic Korean refugees who returned from various countries under different circumstances.

South Korea has strongly denounced the Russian invasion of Ukraine. The nation’s central bank has severed ties with Russia's central bank in line with the international community’s ongoing pressure on Moscow to stop its aggression against Ukraine.

The banned export items include electronics, semiconductors, computers, information and communications, sensors and lasers, navigation and avionics, and marine and aerospace equipment.

South Korea's government has pledged $40 million for humanitarian assistance to Ukrainian people suffering due to the conflict. Seoul has already provided Kyiv with assistance including helmets, tents, blankets, medicines and 40 tonnes of medical equipment worth about $10 million.

The South Korean Catholic Church has also stepped in to support Ukrainian people who fled to other countries.

Catholic group One Body One Spirit (OBOS) has sent $450,000 for Ukrainian displaced people and refugees. The group is currently running a second round of fundraising for Ukrainian people.