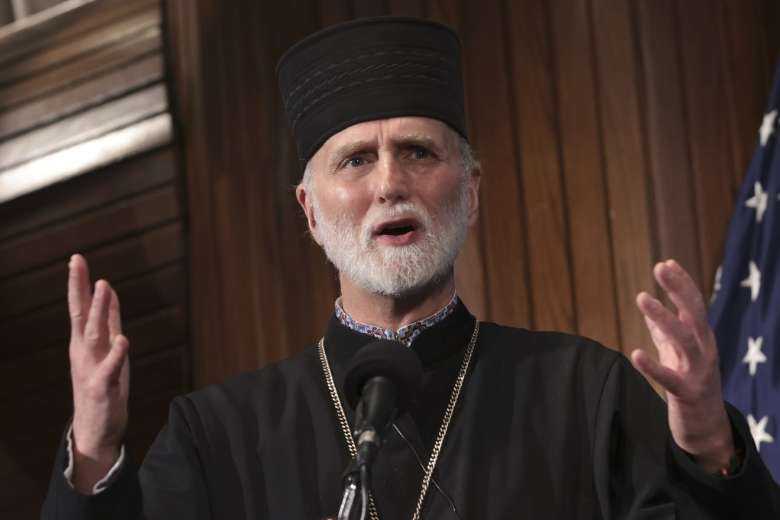 Archbishop Borys Gudziak of the Ukrainian Catholic Archeparchy of Philadelphia speaks during a press conference at the National Press Club on March 15 in Washington, DC. (Photo: AFP)

The Eastern-rite Catholic bishops of the United States, meeting recently at the Maronite Catholic Pastoral Center in St. Louis, expressed concern for the plight of Ukraine and Ukrainian refugees fleeing Russia's ongoing war against their homeland.

Their agenda included meeting via Zoom with two of their brother bishops who were unable to attend the meeting in person: Archbishop Borys Gudziak, the Ukrainian Catholic archbishop of Philadelphia and the head of external relations for the worldwide Ukrainian Catholic Church; and Bishop Bohdan J. Danylo of the Ukrainian Catholic Eparchy of St. Josaphat in Parma, Ohio, who was with Catholic Extension officials on a March 25-April 1 trip to Poland along its border with Ukraine.

The bishops gathered in St. Louis heard "their terrifying stories as well as their brave efforts to assist the poor, displaced and suffering from the war in Ukraine," said a news release on the March 30-31 meeting.

"The bishops expressed their support and solidarity for the efforts for justice and peace in Ukraine, and encouraged humanitarian donations and continuous prayers for peace," it said.

"I thank all of the leaders of the Eastern Catholic churches and of the Roman Catholic Church and all the clergy, religious and faithful that they represent in the U.S. for their heartfelt prayer, active solidarity and generous support of the suffering people of Ukraine," Archbishop Gudziak said in an April 4 email message to Catholic News Service about the gathering of his brother bishops.

"We are not alone in this terror and horror and we trust that the will of the Lord will be done," he said. "I pray that this tragedy will in the end be transformative. This Lent we walk together through the Passion and Crucifixion to the Resurrection and new life."

The archbishop has strongly reiterated that message and called for an end to the war and holding Putin accountable in many interviews, panel discussions and news briefings

In an interview the day Russian armed forces invaded Ukraine, on Feb. 24, Archbishop Gudziak said the East European country is "being crucified before the eyes of the world."

In a wide-ranging interview March 14 with Catholic News Service in Washington, the prelate said Russian President Vladimir Putin did not invade Ukraine out of concern that NATO would encroach on his borders, but concern about "the disease of democracy that could spread like a virus, and that's deadly for oligarchies and authoritarian rulers," said the archbishop, who serves as a "foreign minister" for the Ukrainian Catholic Church.

Russia needs "Ukraine's territory, its population, its market, its technological capacity ... This country, with its seaports, helps Russia return to its nostalgic colonizing and imperial building," he said.

The archbishop has strongly reiterated that message and called for an end to the war and holding Putin accountable in many interviews, panel discussions and news briefings.

As of April 11, according to the United Nations, more than 10 million Ukrainians have fled their homes since the Russian invasion. One-quarter of them are now in Poland.

On April 8, a missile strike on a train station in the eastern city of Kramatorsk, Ukraine, killed at least 52 people, including five children, and left 100 more civilians injured

In recent days, world leaders have raised the issue of "serious war crimes" committed by Russian troops including in Bucha, Ukraine, a suburb of the Ukraine capital of Kyiv, where images that began circulating April 1 showed bodies strewn across streets.

On April 8, a missile strike on a train station in the eastern city of Kramatorsk, Ukraine, killed at least 52 people, including five children, and left 100 more civilians injured.

The bishops meeting in St. Louis thanked Pope Francis "for his consecration of Russia, Ukraine and all the world to the Immaculate Heart of Mary as well as his efforts to serve the poor, refugees and displaced persons from Ukraine and to bring an end to the terrible war."

Since praying the Act of Consecration March 25, in which much of the Catholic world participated at Pope Francis' invitation, the pontiff has renewed his call for an end to the war in Ukraine and strongly denounced the conflict as a barbaric act used by those in power at the cost of innocent lives.

Other items on the Eastern Catholic bishops' St. Louis agenda included: Eastern Catholic catechetical ministries; safe environment protocols for child and youth protection in each eparchy; the new translation of the Code of Canons of the Eastern Churches; a historical presentation on the Armenian Church; and financial assistance received from the U.S. bishops' Catholic Home Missions Collection.