If Pope Francis and Patriarch Kirill manage to iron out differences, the war may change its course forever 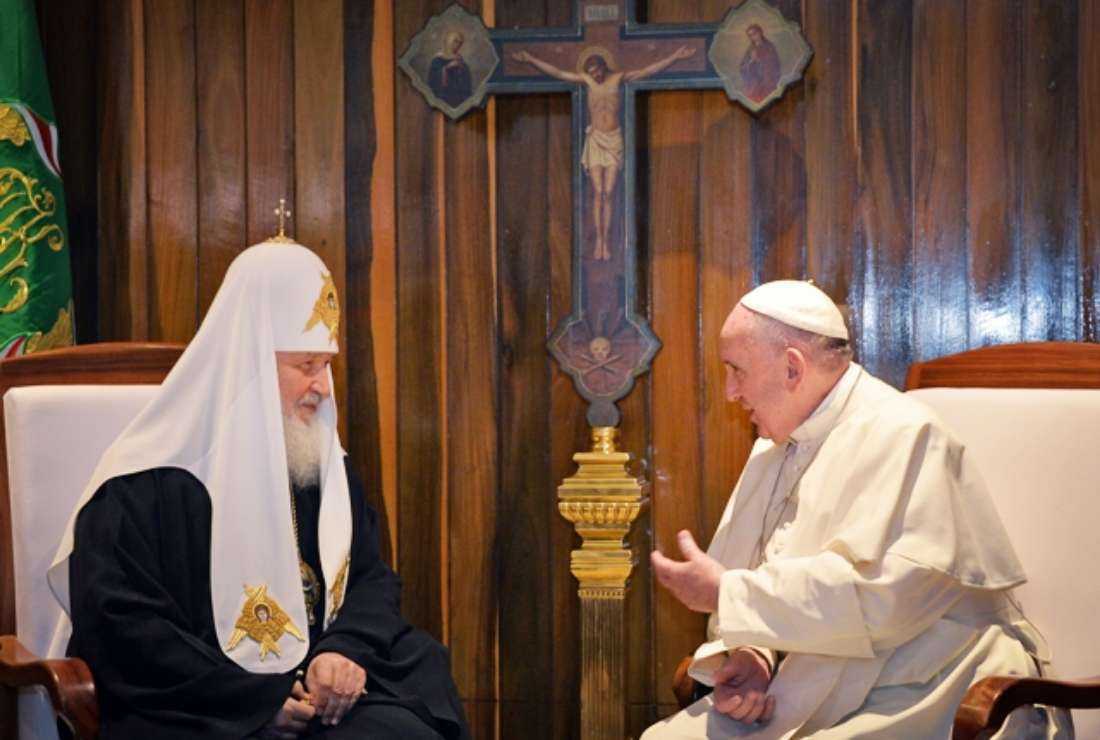 Pope Francis (right) and the head of the Russian Orthodox Church, Patriarch Kirill, speak during a historic meeting in Havana, Cuba on Feb. 12, 2016. (Photo: AFP)

Come September, Pope Francis will visit the Church's youngest bishops' council and its youngest cardinal in Central Asia, where the Church is in missionary mode and inter-religious harmony holds the key to its growth.

In the capital of Kazakhstan at the Congress of the Leaders of World and Traditional Religions, Pope Francis, who has repeatedly condemned Russia's ongoing war in Ukraine, may also meet Russian Orthodox Patriarch Kirill, who used Christianity in defense of the war in Eastern Europe.

Pope Francis's visit to the Central Asian nation takes place to mark the 30th anniversary of diplomatic ties between the Holy See and Kazakhstan. With an estimated population of 72 million, mostly Muslim, Central Asia has a significant concentration of Russian Orthodox Christians who are divided over the position held by Patriarch Kirill.

In Kazakhstan, the pope will bank on the Catholic Bishops' Conference of Central Asia (CBCCA) which was formed in October 2021. Its members are bishops leading tiny Catholic communities of the former Soviet republics of Kazakhstan, Uzbekistan, Kyrgyzstan, Turkmenistan, and Tajikistan, as well as Mongolia and Afghanistan.

The conference enjoys the goodwill of governments as the Catholic Church in Central Asia was restored after the fall of the Soviet Union in 1991. While the bishops' conference of Kazakhstan is a member of the Federation of Asian Bishops' Conferences, Uzbekistan, Kyrgyzstan, Turkmenistan, and Tajikistan are associate members.

The pope is expected to participate in the opening and plenary sessions of the Congress of Leaders of World and Traditional Religions. He will attend the closing ceremony on Sept. 15 to adopt the final declaration.

"It will give Asia's youngest cardinal-elect and Mongolia's only bishop, Giorgio Marengo, the opportunity to meet Pope Francis in Asia"

The previous papal visit to Central Asia was in 2001 when Pope St. John Paul II was there.

The call for the Congress of Leaders of World and Traditional Religions gathered steam days after the 9/11 terrorist attacks in New York, amid fears of inter-religious and inter-civilizational conflicts. Since 2003, the summit has been held triennially in Nur-Sultan, the capital of Kazakhstan.

Central Asia is home to more than 100 ethnic groups. The summit is the brainchild of former Kazakh President Nursultan Nazarbaev, who drew inspiration from Pope St. John Paul II's 1986 Day of Prayer for Peace, held in the hill town of Assisi which saw religions and leaders promoting interreligious dialogue, peace and harmony.

"I look forward to this important event from the point of promoting interreligious dialogue, and for the theme of unity to bring countries, which is much needed for the world today," Pope Francis stated about this forthcoming visit to Kazakhstan.

The papal visit is important for the Church in Asia as it will give Asia's youngest cardinal-elect and Mongolia's only bishop, Giorgio Marengo, the opportunity to meet Pope Francis in Asia.

At 47, the Italy-born Cardinal-elect Marengo is considered an Asian, because as a Consolata Missionary he has chosen to work in an Asian country. As apostolic prefect of Mongolia, he leads a tiny Catholic community of some 1,300 Catholics in a country of some 3.5 million people. The country has just two Mongol priests, 22 foreign missionaries, and 35 nuns.

Cardinal-elect Marengo is expected to play a vital role in linking the Church in Europe and Asia in more ways than one. Naming cardinals from cities with less prominence but thriving Catholic communities, Pope Francis has given stress on Asia, where the Church has been growing unlike in the West.

With his May 29 announcement of new cardinals, the 85-year-old pope has ensured that the number of cardinals from Europeans is decreased, while Asia stands tall with 20. As the youngest cardinal, Marango will be eligible to vote in papal conclaves for 33 years.

The pope may also meet Patriarch Kirill, who is tipped to attend the Congress of World and Traditional Religions after they canceled a planned encounter in Jerusalem due to the potential political fallout in mid-June.

After the Russian invasion of Ukraine on Feb. 24, a mass displacement with millions fleeing their homes occurred and Patriarch Kirill has criticized the international community for the apparent support of the conflict.

However, top aides such as Cardinal Pietro Parolin, Vatican secretary of state, have condemned Patriarch Kirill's defending Christian morality as a justification for the war.

In an interview with the Italian newspaper, Corriere della Sera on May 3, Pope Francis urged Patriarch Kirill not to "turn himself into Putin's altar boy," which did not go down well with the Moscow Patriarchate.

"Imposing sanctions is easy. But to find consensus on when and how they should be lifted is much more difficult"

Patriarch Kirill faces increased pressure from both the international community and the Orthodox community. The fresh rounds of sanctions imposed by the European Union against Russia include Patriarch Kirill who is among those blacklisted by the EU.

Imposing sanctions is easy. But to find consensus on when and how they should be lifted is much more difficult. Maybe the pope can come to the aid of the patriarch.

If Pope Francis and Patriarch Kirill meet at the Kazak summit, both will be free to talk without the formalities of a formally scheduled meeting.  If the pope and the patriarch manage to iron out the differences on the sidelines of the Congress of Leaders of World and Traditional Religions, Central Asia will serve as a bridge between the western-eastern cultural transmission and the war in Ukraine may change its course forever.