'On the Edge' charts religious freedom across Asia 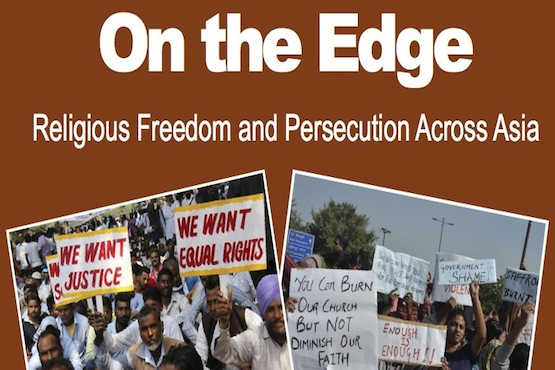 On the Edge, a comprehensive report on religious freedom across Asia, is to be launched in Yangon, Myanmar on Oct. 14.

On the Edge is the first of a series of annual reports about the state of religious persecution among religions in the region by government and by each other.

On the Edge is the first Asia-wide assessment of the topic and is published by a group with unmatched resources on the ground and with indigenous reporters.

Designed to shine a light on religious freedom in a region where more than one third of the world's people live, On the Edge will be launched in Yangon by Myanmar's first ever cardinal, Charles Muang Bo on Oct. 14.

UCAN's first report is an account of religious persecution across a region, where the world's big four religions — Christianity, Islam, Buddhism and Hinduism — co-exist in context with growing intolerance.

The first report will focus on Bangladesh, Sri Lanka, China, India, Indonesia, the Philippines, Vietnam and on the Rohingya Muslim minority who stretch across Myanmar and Bangladesh and whose attempts to escape persecution have taken them to Thailand and Malaysia.

"Beneath many of the conflicts across Asia, religion is actually the source code for understanding what is going on," said Father Michael Kelly S.J., UCAN Executive Director and editor of On the Edge. "But frequently religion is ignored as a causal factor. Why? It's for a very simple reason: those reporting the events have little grasp or understanding of the religions triggering the conflicts or the history of religious conflicts that are the context for contemporary events."

Cardinal Bo, who will launch the report, is one of the foremost figures in his native Myanmar and beyond it in Asia, has sought to build harmony and cooperation among the religions where his own, Catholicism, is a small minority faith.

Myanmar has been wracked by destructive wars for 50 years between ethnic minorities and the military state that ruled the country until its recent transition to democratic rule. But many of the contending ethnic groups are also of diverse religious persuasions.

The most glaring recent instance of persecution of a minority with a religion unwelcome in mainstream society in Myanmar centered on the Rohingya in 2015, which became the greatest humanitarian crisis in the region since the refugee flight from Vietnam in the 1970s and '80s.

The Rohingya are a Muslim minority brought to Myanmar from Bengal (today's Bangladeshi part of Bengal) by the British in the 19th century when Burma (now called Myanmar) was a colony under British rule.

The presence of the Rohingya was deemed unwelcome by aggressively nationalistic Buddhist monks who want them repatriated to Bangladesh where they have standing, relations or support networks.

You can see more of the book and order a copy here.