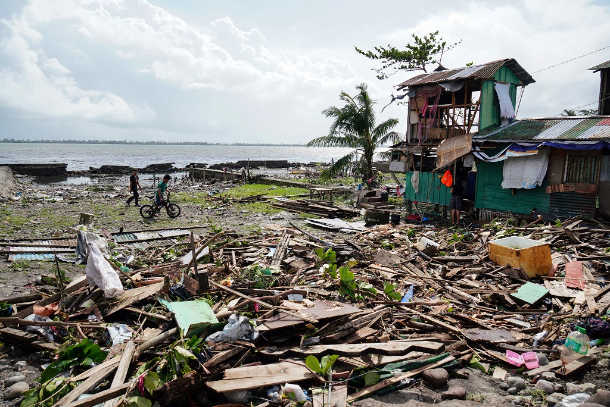 Residents walk past a house damaged by Typhoon Phanfone in Tacloban in Leyte province on Dec. 25. (Photo: AFP)

A typhoon that swept across the central Philippines on Christmas Day killed at least 21 people and caused massive damage to homes and tourist areas.

Many people in the Catholic-majority country were preparing for Christmas celebrations with their families when the typhoon struck.

Two people were electrocuted and one was killed by a falling tree. Several members of one family were swept away by a flash flood.

Phanfone followed a similar path to Typhoon Haiyan, which killed at least 6,000 people in 2013.

The full extent of the damage has yet to be determined as power and communications in some areas remain cut off.

Some tourist areas, including the popular resort island of Boracay, were also damaged.

Thousands of Christmas travelers had their flights and ferries canceled due to the typhoon. Some 115 domestic flights were canceled and more than 15,700 passengers left stranded.

Earlier this month, Typhoon Kammuri, the 20th to hit the Philippines this year, killed 13 people and damaged more than 8,000 houses.