Thad Hinunangan lost his home, friends, and many of his neighbors to Super Typhoon Haiyan, but there will be no stopping him from anticipating the joy of Christmas during the "Misa de Gallo (Mass of the Rooster)" on Monday.

"Attending will show the world that our faith is stronger than the storm, and proves that Warays are a tough bunch," Hinunangan told ucanews.com.

Warays are native to the provinces of Samar and Leyte that were badly hit by Typhoon Haiyan on November 8.

The Misa de Gallo, which has become a Filipino tradition since the arrival of Spanish colonizers 400 years ago, is a novena of dawn Masses from December 16 to Christmas Eve.

The celebration is held as early as 3 am in several provinces. Pope Sixtus V ordered that the Mass be heard before sunrise because it was the harvest season in the Philippines, and farmers needed to be in the fields immediately after the celebration.

Filipinos believe that if one completes all nine days of the Misa de Gallo and makes a wish as part of the prayers, it will come true.

During the nine-day celebration Filipinos adorn their homes with star-shaped lanterns called "parol," which were believed to help parishioners before electricity was invented, to make their way to church in the early morning.

Hinunangan said the disaster, and the fact that thousands of people have been left homeless and large parts of the city still in darkness, has made this year’s Misa de Gallo "more meaningful."

"It is more fitting to celebrate Christmas during this time of crisis knowing that a savior was born to us to save us," said Father Amadeo Alvero, spokesman of Palo archdiocese. 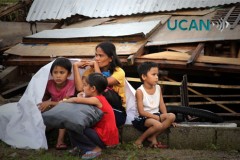 Haiyan: A story of death and survival Cardinal Luis Antonio Tagle described Misa de Gallo as "a great source of spiritual nourishment for our faithful." He, however, urged priests in a recent circular to celebrate the Mass with "genuine pastoral care for the spiritual benefit of the faithful."

Despite a curfew that ends at 5am in many parts of Samar and Leyte, Alvero said the Church will continue to hold the Misa de Gallo in parishes at 4am.

"The authorities will understand our schedules because this is a tradition," the priest said.

Chief Superintendent Henry Losañes, the regional police chief, said he will discuss "security preparations" with Church leaders. "We will be adjusting the curfew so that churchgoers will be able to attend the Masses," he said.

In Tacloban, Christmas lanterns and Christmas trees are being put up amid the ruins and around churches while soldiers, who have been involved in the cleanup around the province, play Christmas carols on a portable sound system.

"We're trying to play Christmas songs to help lift their spirits," said Brigadier General Jet Velarmino, head of Task Force Yolanda, which is helping in the relief and rehabilitation efforts in Leyte province.

Tacloban city administrator John Tecson Lim said the authorities are planning a "meaningful" Christmas for the people. "What is important however is we must continue to hold on, to have hope and work together," he said.

On Friday, the official death toll from Super Typhoon Haiyan passed the 6,000 mark, according to the National Disaster Risk Reduction and Management Council.

In its latest report, the agency said Haiyan affected some 16 million people in 12,122 villages, displacing some 3.9 million individuals, 101,646 of them are still staying in 383 evacuation centers.