Women had slept in church to defend against Zhejiang cross removals 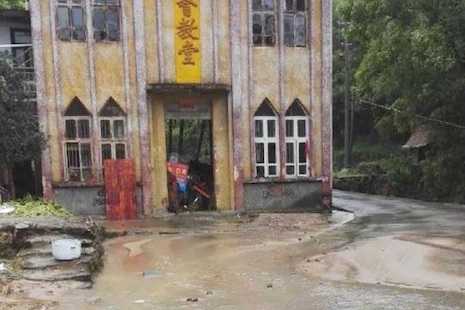 The ongoing cross-removal campaign in China's Zhejiang province has taken a tragic turn after two elderly women who were defending their church's cross were swept away by flash floods caused by Typhoon Soudelor.

Huang Yusong, 77, and Zhou Yanxiang, 81 died Aug. 8 when flash floods engulfed the Yangmei Protestant Church in Wenzhou Aug. 8. The women had been sleeping on the ground floor of the church.

“Their bodies were found a few hundred meters from the church the next morning,” a local source, who asked not to be named, told ucanews.com.

“Four faithful had been staying at the church to defend their cross from removal. The two elderly women slept on the ground floor due to leg and arm pains while the other two slept on the upper floor,” the source said.

The sudden floods were caused by heavy rains from Typhoon Soudelor, which has taken at least 40 lives across China and Taiwan.

Following the deaths, Christians took to Chinese social media to appeal for prayer for the two women. Many of these social media users called the women martyrs for losing their lives while defending the cross.

Over the past 20 months, authorities from the ruling Communist Party have conducted a campaign to remove crosses from churches and buildings across Zhejiang. The province is one of the most heavily Christian areas in China, with an estimated 2 million Christians, including 210,000 Catholics.

According to another source, some family members say the government is to blame for the two women's deaths.

“Some others believed the government should take full responsibility for their deaths, as the tragedy would not have happened if there was no cross removal,” the source said.

The source said authorities intend to compensate each family with 70,000 yuan, or about US$11,000. But in return, the source said, family members are expected to surrender their rights to pursue any legal action.

Typhoon Soudelor swept across Taiwan before it made landfall on the mainland in Zhejiang and Fujian, another of China's heavily Christian provinces, on Aug. 8. As of Aug. 10, the storm left at least seven people dead in Taiwan, and more than 400 people injured. In China, the typhoon killed 33 people as of Aug. 11.