Typhoon-damaged church hospital in Taiwan gets back on feet Part of the roof of St. Mary's Hospital of Taitung Diocese was blown off by Super Typhoon Nepartak on July 7. (Photo supplied)

A church-run hospital that serves indigenous people in Taiwan has successfully raised funds to repair their typhoon-damaged buildings, but they need more help to sustain a free food delivery service for the elderly.

A large glass window in the hospital was smashed and a roof was blown away. Trees in the compound broke and fell.

The nearby St. Mary's Health Farm suffered greater loss with 10 tons of harvested rice ruined by heavy rain after wind ripped off the warehouse roof.

"We wanted to send the rice to our mill partner to dry immediately after the warehouse flooded," said Lan Shih-chang, public relations director of the hospital.

"But the mill suffered a blackout during the storm so there was a delay and the rice began to sprout. We had to destroy it for safety reasons," said Lan.

The farm will have to wait until the second crop in November before it can be self-sufficient again.

"Some people have donated rice but our warehouse is under repair and we have no place to store it," Lan said. "It would be better if the public donated money as the free meal delivery service requires resources."

The health farm delivers meals from Monday through Saturday to 800 elderly who live alone in the region. The operation consumes 2,700 kilograms of rice per month. "Though there are subsidies from the central government, the amount is not stable," said Lan.

Though the Taitung Diocese has a small Catholic population of 57,000, St. Mary's Hospital is a well-respected medical institution that has offered free services to marginalized indigenous people since it was established in 1961. 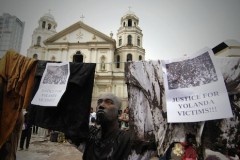 Neighbors have lent their kitchens to St. Mary's so the hospital can provide meals for in-house patients and the elderly. They even supply 100 extra lunch boxes each day to help typhoon victims.

The health farm was opened in 2011 and offered jobs to 40 indigenous families who lost their homes in the 2008 typhoon.

Two-thirds of the farmland is used for rice cultivation and the remaining space is used to grow vegetables. With two crops a year, surplus rice is sold online as "Rice of Grace" to sustain the kitchen's operations.