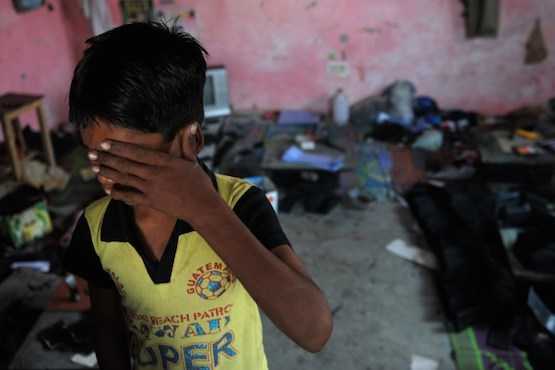 This 2009 file photo shows an Indian bonded child laborer crying during a raid and rescue operation in New Delhi. A new report on modern slavery shows that two-thirds of the estimated 45.8 million people enslaved worldwide live in Asia. (Photo by AFP)

Two-thirds of the estimated 45.8 million people enslaved worldwide live in Asia, according to a damning report on modern slavery released May 31.

Published by the U.K.-based Walk Free Foundation, the Global Slavery Index used randomized samples to assess 167 countries on the number of slaves, percentage of population enslaved, and government action. In the report, slavery is defined as "situations of exploitation that a person cannot refuse or leave because of threats, violence, coercion, abuse of power or deception."

The study found that India, China and Bangladesh have among the most slaves in the world, while North Korea, Cambodia and India have the highest proportion of their population enslaved.

In Asia, the forms of slavery vary greatly. Trafficked fishermen in Thailand, child brides in Bangladesh, and debt bondage in Vietnam’s apparel industry all make an appearance in the report, which pushes for greater government protection.

"All forms of modern slavery were identified [in Asia] including forced labor in brick kilns, agriculture and the garment sector, child soldiers in Afghanistan, India and Thailand, forced begging, and commercial sexual exploitation."

Southeast Asia made headlines last year with the discovery of trafficking camps and scores of mass graves on the Thai-Malaysian border. There, Rohingya would-be refugees were held for ransom or sold into the fishing industry or as brides. The report highlights government complicity in the trade, noting that high-ranking army officials, police and politicians were among the 92 people arrested. In Cambodia, 1.6 percent of the population are estimated to be enslaved, as fishermen, domestic workers, and also as brides to China — a country that is increasingly trafficking women from Vietnam and North Korea as well to meet a shortfall. Globally, North Korea has the highest proportion of its population in slavery, with 4.4 percent "subjected to state-sanctioned forced labor, including through forced labor as political prisoners and as workers on overseas contracts."

But in terms of sheer numbers, India tops the list with more than 18.3 million people enslaved — more than five times the number in China, which is ranked second. Though the country is commended in the report for efforts to improve legislation and enforcement, the size of the problem makes it difficult to tackle. The report notes that child forced labor, including in begging rings, brick kilns, and handicrafts is particularly high among the most impoverished and vulnerable castes, while child marriage remains rampant.

Bishop Oswald Lewis of Jaipur, chairman of the Office of Labor of the Catholic Bishops' Conference of India, said the church had been advocating to eradicate child labor.

"Young girls are brought from tribal areas to cities for domestic work and exploited at the hands of their agents and employers," he said.

"I myself have been writing to church institutions across the country not to employ anyone below the age of 18 years old," he said.

Bishop Lewis said that there are different units across the country run by Christian nuns and the laity fighting for the rights of domestic workers.

In Bangladesh, which has the fourth highest number of slaves in the world, the survey notes that the number appears to be rising from 680,900 in the last estimate to 1.5 million this year. Again, forced child marriage, debt bondage and forced sex work remained key factors.

"There are good laws like the Labor Act and Child Marriage Restraint Act, but there is a serious lack of enforcement on the part of the government. Moreover, human rights groups including state-sponsored ones are not playing an effective and independent role to raise their voice against slavery," Nokrek told ucanews.com.

Nokrek took aim at businessmen and the wealthy for failing to empathize with their workers.

"Here you can find child workers in almost every restaurant you visit, and even human rights activists employing underage domestic helpers. It seems like keeping people in slave-like conditions has become a habit of the rich and influential," he said.

The Catholic Church through its social service arm Caritas has been working on pulling people out of slavery in Bangladesh, said Nokrek, who is also director of Caritas Development Institute. The organization is running various projects in urban areas to assist vulnerable groups — including abused garment workers and child workers, victims of human trafficking and forced prostitution — by providing legal services and shelters.

"Caritas runs advocacy programs across the country to eliminate various social vices like child labor, child marriage and hazardous working conditions in industries including the garment sector," he said.