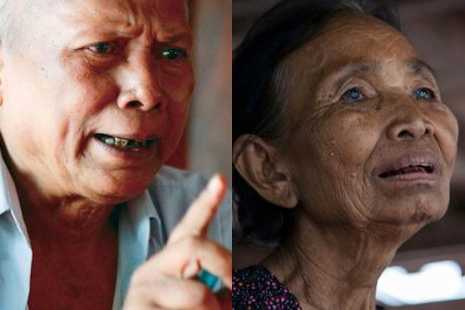 By Stuart White and May Titthara for the Phnom Penh Post

It is the first time either has been officially named by the court.

Former Khmer Rouge navy commander Muth was charged in Case 003 with “murder, extermination, enslavement, imprisonment, persecution on political and ethnic grounds, and other inhumane acts” at the Wat Enta Nhien and S-21 security centers, at sea and on islands claimed by Democratic Kampuchea.

Case 004 suspect Chaem, who is accused of leading purges, was charged with similar crimes relating to the Phnom Trayoung security center and the Spean Sreng worksite.

Yesterday, the 72-year-old maintained her innocence, and said she was unfazed by the court’s decision.

“Why should I be worried about the charges against me?” Chaem asked. “I am not wrong, the person who charged me is wrong.”

The charges were issued unilaterally by Harmon, without the approval of his Cambodian counterpart You Bunleng, who has maintained that he considers the cases against the suspects in government opposed Cases 003 and 004 to be closed.

“The two judges have different views on these cases which are covered by the rules of the court,” said court legal communications officer Lars Olsen, explaining the unilateral action.

“The court’s legal framework anticipates situations like that, and there are measures in place to deal with that,” he added.

The charges were issued in absentia, a decision Olsen said was based on “several considerations”.

First of all, he said, the charges must be issued in order to give defense teams access to the case file — long a demand of theirs — and in order to expedite the proceedings. Additionally, he said, “it has not been possible, within a reasonable time, to get any arrest warrants executed”.

The government has frequently voiced its opposition to any cases beyond the already-concluded Case 001 against S-21 commandant Kaing Guek Eav, also known as Duch, and the current Case 002 against Khmer Rouge leaders Nuon Chea and Khieu Samphan.

In a speech just last week, Prime Minister Hun Sen — himself a former Khmer Rouge cadre who defected and took part in the Vietnamese invasion that overthrew the regime — obliquely raised the prospect of future wars if prosecutions moved forward in Cases 003 and 004.

“The trial wants to go [for] too much...[and] expand the scope, causing some people to go back to the jungles,” he said. “We have to think about the importance of peace, the importance of life. How many people will die if war comes again?”