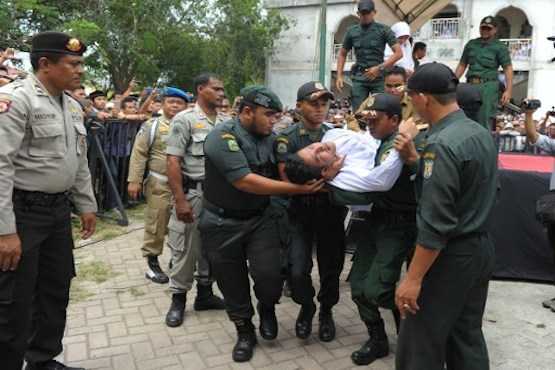 An Acehnese man gets carried away after collapsing while being caned by a religious officer in Banda Aceh in this Feb. 27. Aceh is the only province in the world's most populous Muslim-majority country that imposes Shariah. People can face floggings for a range of offences — from gambling, to drinking alcohol, to gay sex. (Photo by Chaideer Mahyuddin/AFP)

Two gay Indonesian men have been arrested and face 100 lashes in a case that is drawing international attention to the enforcement of controversial new Islamic bylaws in the semi-autonomous Aceh province.

Human Rights Watch has demanded their immediate release, saying their possible punishment — a public beating with a stick — constitutes torture.

The sentence has already been meted out for crimes such as adultery, but it is believed this would be the first time Aceh’s new statutes concerning religion and morality could be enforced against homosexuality, the Guardian newspaper reported.

Aceh is the only region in Indonesia, which allows local authorities to maintain parallel laws and police forces based on religious interpretations.

The anti-gay law was passed in 2014 and Human Rights Watch says these new statutes and punishments violate human rights treaties to which Indonesia is a party, and has asked president Joko Widodo to intervene.

"The agreement which granted Aceh the legitimate right to form its own local bylaws did not allow them to persecute people for their religion or sexuality," said Andreas Harsono, a researcher with Human Rights Watch in Indonesia.

"Across Indonesia today, we are seeing rising discrimination in the name of Islam, including against women and LGBT community."

In October, Jokowi spoke out against increased abuse directed at LGBT persons in Indonesia, and said police must act to defend them.

"However, Jokowi has not backed up that statement with action," Human Rights Watch said in a statement on 9 April.

The two men, reportedly aged 20 and 24, were caught on 28 March by unknown men who forcibly entered a home.

Local bylaws allow this kind of citizen’s arrest and the men are now being held by Shariah police.