Since the uprising on Oct. 18, last year, Chile is roiled by violent street protests over an increase in subway fare 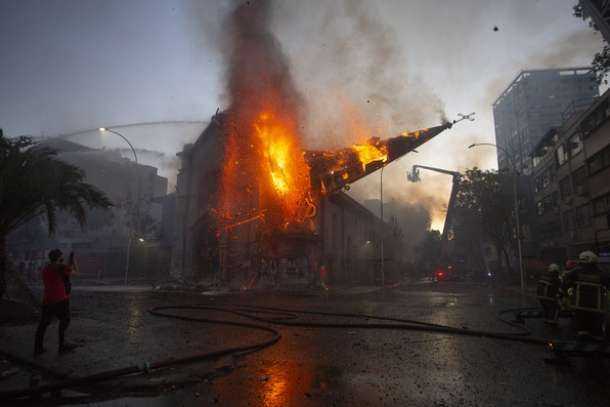 The dome of the church of Asuncion falls down burning in flames after being set on fire by demonstrators on the commemoration of the first anniversary of the social uprising in Chile, in Santiago, on October 18, 2020, as the country prepares for a landmark referendum. (Photo: CLAUDIO REYES / AFP)

Two churches were set on fire in Santiago on Oct 18 in the violent attacks by hooded men on the anniversary of a social revolt that began last year.

The initially peaceful mass gathering turned violent in Plaza Italia, and the demonstrators set the church of La Asunción on fire, damaging the building, dome, and bell tower. The church was attacked by hooded protesters marking the beginning of the social outbreak on Oct 18, 2019.

Firefighters and rescuers attempted to bring the fire in the church under control. "Let it fall, let it fall," shouted some hooded men, while the dome of the church, known as the "parish of the artists," was consumed in the fire. Earlier, the church of San Francisco de Borja, operated by military police, was looted and burned, but the fire brigade managed to bring it under control. Church leaders condemned the attacks and sought an end to the violence. Since the uprising on Oct. 18, 2019, Chile is roiled by violent street protests over an increase in subway fares. A plebiscite is slated for Oct. 25. It is to help more than 14.7 million Chileans decide whether to change the Constitution enacted during the country's military dictatorship, which remains a legacy of the Augusto Pinochet  (1973-1990) regime. The referendum is the result of a political agreement that follows weeks of violent protests since last year. The referendum was originally planned in April but was put off due to the Covid-19 pandemic. Center-right President Sebastian Pinera, whose popularity has taken a beating over handling the protests, has asked the mass to remain peaceful and follow the social distancing norms. Chile has confirmed 13,635 deaths over the course of the pandemic.