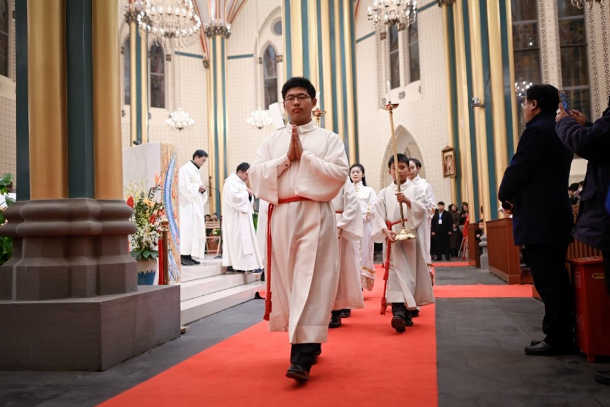 Chinese clergy attend a Mass during Christmas Eve at a church in Beijing on Dec. 24, 2018. (Photo by Wang Zhao/AFP)

Two dioceses in China are being forced to join the Chinese Catholic Patriotic Association (CCPA), a government-controlled body established to oversee the Church in China.

Several sources on the mainland have expressed concern that these are not isolated cases, but merely the beginning of a national movement that will see all dioceses eventually drawn into the CCPA's orbit and strictly controlled.

All parishes of Fuzhou Diocese in eastern China's Fujian Province have been "asked" to join the CCPA, with some of their priests allegedly banned from leaving China, the sources told ucanews.com.

One source highlighted how there was still considerable opposition to the idea of merging the government-recognized open Church with the so-called "underground Church," despite the Vatican signing a provisional deal with Beijing last September on the appointment of bishops.

Pope Francis admitted in the wake of the compact that underground Chinese Catholics could suffer as a result of it, and the mainland sources said there is widespread concern that the CCPA violates church doctrine.

When approaching Fuzhou Diocese, government officers reportedly cited how Mindong Diocese in the same province had already agreed to fall under its wing.

However, while the authorities claimed that "all" of the clerics in Mindong had pledged allegiance to the CCPA, this reporter's sources challenged that and said not everyone was on the same page.

"The news made some of the priests in Fuzhou very anxious as they believe the diocese has been coerced into joining up," he said.

Incidentally, one of the new government-sanctioned bishops to be installed in power in the wake of September's provisional agreement with the Vatican now leads Mindong Diocese.

The Holy See asked Bishop Vincent Guo Xijin to step down so that Bishop Vincent Zhan Silu, formerly considered an illicit prelate in Rome, could replace him.

The local government has granted Bishop Guo some vestigial rights, such as being allowed to wear his bishop vestment while co-celebrating Christmas Mass with Bishop Zhau, but it has still not recognized his Episcopal status because he has not joined the CCPA yet, the source noted.

The provisional agreement included a clause stating that Guo must still be recognized as a bishop by the Chinese government even if he decided not to join the CCPA, another source told ucanews.com.

In addition, according to a church document obtained by this reported, the China-Vatican negotiators are still working on whether underground priests should be compelled to accept the "guidance" of the CCPA or not.

The document, which was sent to Fuzhou Diocese, noted how the Vatican opposed the idea of any local Chinese government pressuring the churches and parishes within its jurisdiction to join the CCPA.

Apparently the Holy See warned that such a move could derail the ongoing dialogue.

Furthermore, the document instructed any church communities that fear duress to inform the CCPA that its decision must await the final outcome of the China-Vatican talks.

Meanwhile, the First Catholic Representative Conference of Baoji City — in Fengxiang Diocese in the Ecclesiastical province of Xi'an — was held on May 11, according to a joint report by the national CCPA and the Bishops Conference of the Catholic Church in China (BCCCC).

At the meeting, the CCPA established its first branch in the city and passed its official constitution. Bishop Peter Li was elected its chairman, and a group of diocesan priests were named vice chairmen.

This happened about a month after a church was suddenly demolished in Qianyang city of the same diocese on April 10.

Sources told ucanews.com there was a widespread belief the place of worship had been targeted because local priests had refused to join the CCPA.

At the May 11 meeting, Bishop Peter Li vowed to "lead the city's Catholic priests and faithful under the guidance of the CCPA and the Church Administration Commission in the province, to ‘fully implement the basic principles of the party's religious work, resolutely support the leadership of the Chinese Communist Party and the socialist system, and uphold the banner of loving the nation and loving the Church.'"

Pope Benedict XVI appointed him as a coadjutor bishop of Fengxiang in 2010, and he was elected bishop at a diocese meeting in 2011. But while the CCP has played along so far, Beijing still does not officially recognize him as a bishop, sources said.

Another church source from Shaanxi Province said the CCP was seen as orchestrating all of these moves related to the CCPA, meaning it was likely they would be repeated in other cities and dioceses across China before long. 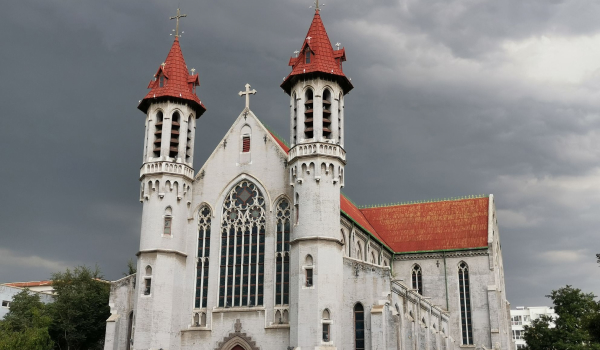