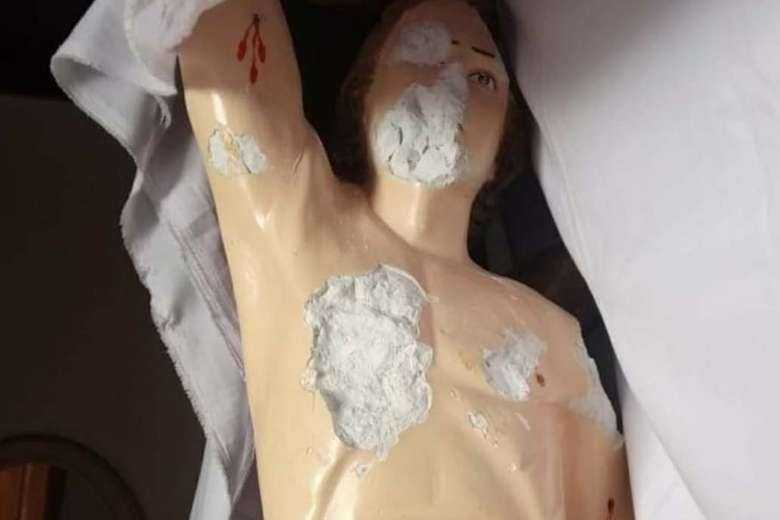 The statue of St. Sebastian in a shrine close to Holy Trinity Cathedral Church in Ramanathapuram in India's Tamil Nadi state after vandals attacked it. (Photo supplied)

Catholics in India’s southern state of Tamil Nadu breathed a sigh of relief after police arrested two suspects for vandalizing a statue of St. Sebastian three days after the incident.

The incident was reported on Jan. 23 at a shrine close to Holy Trinity Cathedral Church in Ramanathapuram.

“We don’t have any history of hostility with anyone and we are surprised at this development,” said assistant parish priest Father Bastin Joseph.

He said the vandals had broken open the glass case and destroyed the statue. Catholics staged a peaceful protest in front of the cathedral demanding action against the culprits.

“We are happy that police arrested two persons and identified two others behind this attack,” the priest said.

Police said that prima facie the incident appeared to be an act of revenge in response to the suicide of a minor girl in Thanjavur district, which falls under Kumbakonam Diocese.

The girl had consumed poison on Jan. 9 and died on Jan. 19 while undergoing treatment.

Some Hindu groups had alleged that the girl, who stayed in a hostel managed by nuns and studied in a church school, took the extreme step after she was harassed for refusing to convert to Christianity.

In her confidential statement to a magistrate, the girl reportedly said that she took the extreme step after the hostel warden made her clean the rooms.

However, police arrested Sister Sahaya Mary, a 62-year-old member of the Franciscan Sisters of the Immaculate Heart of Mary serving as the hostel warden, based on the girl’s statement to the magistrate.

Police said those arrested in the case of vandalism were members of Hindu Aikya Munnani (Hindus' Joint Front), a pro-Hindu organization working for unity among Hindu groups.

One of the arrested is a minor while police continue to search for two others who remain at large, police said.

“It is an assault on secularism,” said Bishop Paul Allappatt of Ramanathapuram Diocese, an eparchy of the Kerala-based Eastern-rite Syro-Malabar Church.

“India is a country where people following different religious faith live in harmony and peace as sons and daughters of the same family,” the prelate said, deploring the rise in recent attacks against minority communities, especially Christians and Muslims.

The prelate blamed political interests for such attacks and appealed to everyone “not to disturb peace and harmony in the country for temporary political gains.”

Data released recently by the United Christian Forum showed the year 2021 was one of the worst years for Indian Christians as they faced persecution across the country.

As many as 486 incidents of violent attacks on the minority community and its institutions were reported in the previous year, the highest since the 328 reported in 2019.

RIZWAN HAZIQ
“Women enrolled in this program will gain an enriching experience through a number of development and engagement initiatives. The best part of all is that at the end of this program these women will have an opportunity to join Jazz on a permanent basis”, said Wajida Leclerc, Chief People Officer, Jazz. https://flare.pk/jazz-to-inspire-women-returning-to-work/
Reply