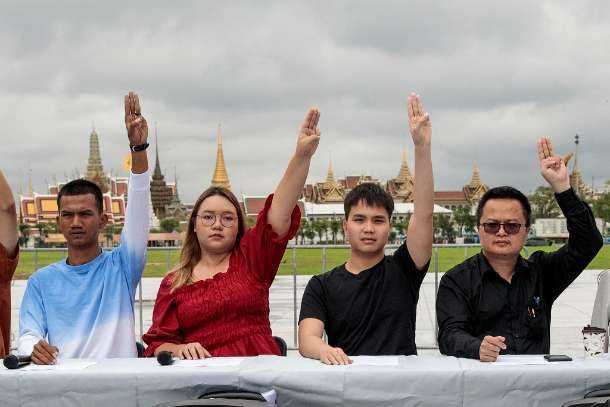 Pro-democracy leaders Panupong Jadnok, Panusaya Sithijirawattanakul, Tattep Ruangprapaikitseree and Anon Numpa raise a three-finger salute during a press conference on Oct. 8 in Bangkok ahead of a planned demonstration on Oct. 14. (Photo: AFP)

Twitter has blocked 926 accounts in Thailand after the US-based company said that its investigation found that they were used by the Thai military to spread disinformation.

“Our investigation uncovered a network of accounts partaking in information operations that we can reliably link to the Royal Thai Army (RTA),” the company said.

“These accounts were engaging in amplifying pro-RTA and pro-government content as well as engaging in behavior targeting prominent political opposition figures.”

The move has been part of a global effort by the company to disable what it calls “state-linked information operations” on its platform in several nations with oppressive governments, including Russia, Iran and Saudi Arabia.

In Thailand the 926 accounts were reportedly used by people linked to the military to wage an online propaganda campaign against opposition politicians and young pro-democracy activists who have been staging regular mass demonstrations for months against the military-allied government, which seized power in a coup in 2014.

In several posts the people behind the accounts mocked and insulted liberal politicians while lauding the government for its achievements even as the administration of Prime Minister Prayut Chan-o-cha, a former army chief, has been widely criticized by citizens over its handling of the economy, which is expected to shrink by nearly 10 percent this year over last year.

Most of the army-linked accounts had only a few followers and many had none, according to an analysis. Some three-quarters of the accounts did not have identifiable users.

Many of the tweets on these accounts sought to downplay the army’s role in a massacre of civilians by a rogue army officer who gunned down 30 people and wounded 57 others during a rampage in February in the northeastern city of Korat.

“The [Information Operations] accounts’ priority was to tweet and retweet messages in support of the army, compliment the army’s measures in handling the incident, and shift the military’s blame to the individual culprit,” a Thai online newspaper observed.

The oldest one of these accounts was reportedly set up on May 27 in 2014, just five days after the coup, which led to a military regime with Prayut at its helm.

However, a Royal Thai Army spokesman has denied that the military was behind the suspended accounts, saying it would not use fake accounts for purposes of propaganda.

“We confirmed to Twitter that we didn’t use the platform as alleged,” said spokesman Santipong Thammapiya. “Our Twitter accounts are only used for public relations purposes and are openly identified with the army. We have no policy of using fake accounts for information operations.”

Thais are among the most avid users of social media globally with some 50 million locals out of a population of 69 million using Facebook, according to market research data.

The country’s social media environment is rife with anti-government and pro-democracy messages despite the draconian Computer Crime Act, the violation of which can land social media users in prison for up to 15 years.

Even relatively mild criticisms of government officials and other powerful individuals can be construed by local courts as a violation of the law, which is frequently used by authorities to silence critical voices, according to prominent rights and free speech advocates.

“Through harassment and prosecution of its online detractors, Thailand’s government has created a climate of fear designed to silence those with dissenting views,” Clare Algar, Amnesty International’s senior director of research, advocacy and policy, said in a recent statement.

“The government’s attacks on freedom of expression online are a shameful attempt to escape scrutiny from those who dare to question them. And repression is escalating, with authorities seemingly using the Covid-19 pandemic as a pretext to further quash criticism and unlawfully restrict human rights.”