Free school caters to kids from slums and shanty towns 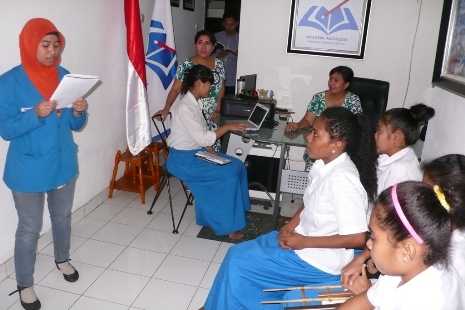 At 13 years old, Deni Jakaria’s life was already at a crossroads.

Poverty threatened to force the teen, who grew up in a Jakarta slum area near Kota Tua, to drop out of school. His future pointed toward taking over his father’s vendor stand selling eye glasses.

“I couldn’t go to senior high school after finishing junior high. My parents had no money,” he said.

Later that year a friend told Deni, who is now 23, about a free private school called the Kartini Emergency School in north Jakarta. It catered to impoverished Indonesian children who lacked viable educational opportunities. Deni was accepted and enrolled. For three years, everything he needed – notebooks, uniforms, supplies, even lunch – was provided by the school for free.

After graduating from Kartini in 2007, Deni found employment. He now works as a quality control officer at a soap manufacturer in West Jakarta, earning a monthly salary of about 2.4 million rupiah, or US$225. He credits the school’s founders, twin sisters Sri Rosyati and Sri Irianingsih for helping him break out of poverty.

"I have the twin sisters to thank for helping me out. Studying at their school changed my point of view. I used to think that poor people couldn’t go to school. Now I see that being poor doesn’t mean being cut off from education," he told ucanews.com.

Rosyati founded the school in 1990, naming it after Raden Ajeng Kartini, a national heroine who pioneered the fight for women’s rights in Indonesia. In 1996, Irianingsih joined her sister in running the school.

The school, part of an informal network of Indonesian schools that operate outside the state’s control, offers a typical academic curriculum. But it also focuses on vocational skills so that its students can find employment upon graduation.

“We teach all the training skills. This is what we call the science of life, meaning that they can be self-sufficient in the future. They can work anywhere. We give them everything they need but money. Let's say a student after graduating from our school wants to be a tailor, so we give her a sewing machine. The main requirement is that they must have adequate skills first,” Rosyati told ucanews.com.

While Indonesia’s primary school system is compulsory, children from poor families that populate Jakarta’s slums and shanty towns find it difficult to pay the fees for uniforms and school supplies. It is these families that the Kartini school tries to reach.

While the country’s school operational assistance program aimed to waive fees for the poor, some families said the program failed to meet their expectations.

Umi Hasanah, a 37-year-old coffin maker, would have withdrawn her children from school had it not been for the Kartini.

“My children can’t go to schools. The education is free indeed, but we still have to buy uniforms and other things for them. We can’t afford it,” she told ucanews.com.

On Feruary 4, Kartini school, which now has 623 students taught by the two sisters and some volunteers, marked its 24th anniversary.

“The reason why we still survive is love. We and our students receive love mutually,” Rosyati said.

The sisters said they provide much of the funding for the school. They also receive donations from various charities and individuals.

Besides Kartini, the sisters also run the free Academy of Indonesia. Launched in August, the academy has nine students studying broadcasting.

Deni is among the academy's inaugural students. He attends the North Jakarta academy after work.

“I want to study as high as I can. I want to be a famous broadcaster. I want to change my family’s economic situation,” he said.