Turning to religion in a year of Indonesian crises 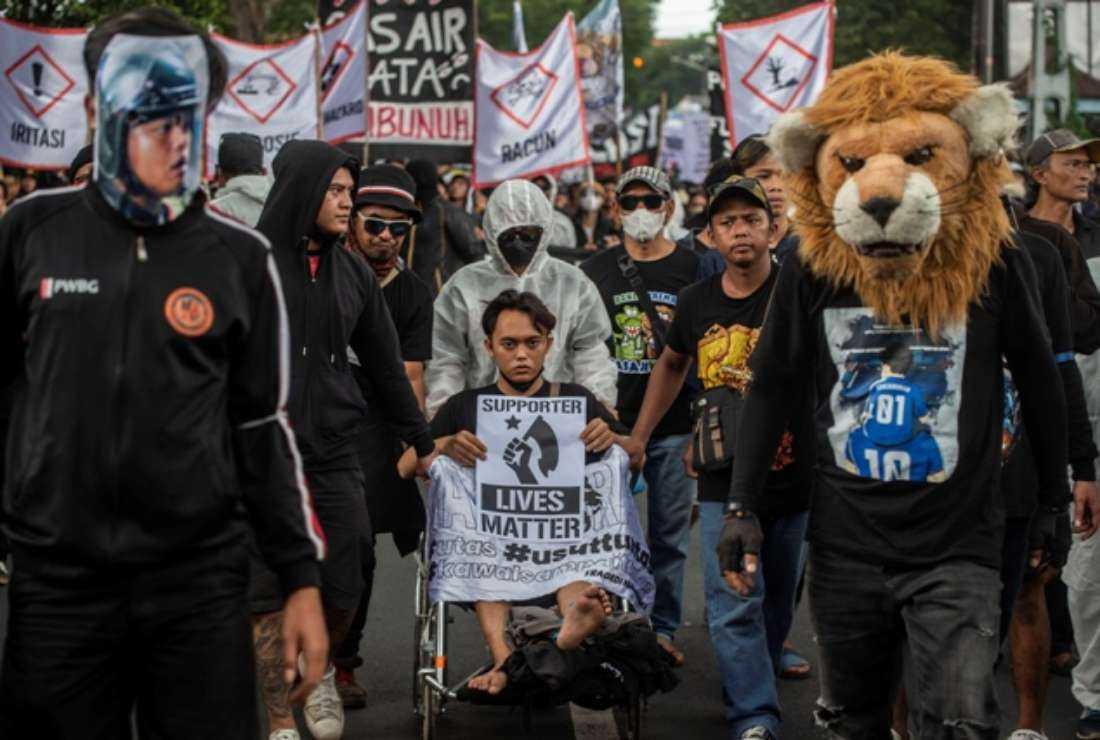 Football fans attend a rally in front of the city hall in Malang on Nov. 10 demanding the Indonesian Football Association be responsible, fair, transparent, and indiscriminate following the deadly Oct. 1 stampede at Kanjuruhan Stadium which took 135 lives. (Photo: AFP)

As a year of natural disasters and religious tensions comes to an end in Indonesia, the Muslim-majority nation appears more aware of the need for inter-religious collaboration for the betterment of humanity and the universe.

After a sloppy recovery from the pandemic — with poverty, malnutrition, and unemployment as core concerns — the archipelagic nation went through a series of deadly tragedies while minority groups continued to face discrimination as apparent from the bomb plots targeting Christmas and New Year celebrations.

The police arrested at least 11 terror suspects in Sumatra last week for allegedly planning to attack large crowds during the holiday season or end-of-year festivities. If not, Indonesians could have witnessed another unnecessary tragedy.

The nation has barely recovered from the football stadium stampede at Malang, East Java, which claimed the lives of 135 supporters in October. They were crushed to death and trampled upon as police fired tear gas to disperse disgruntled supporters, an action seemingly intentional despite the Federation Internationale de Football Association (FIFA) prohibiting the use of tear gas during sports events.

It drew public concern, including from FIFA officials, and became one of the world’s most tragic football incidents.

Apart from man-made disasters, Indonesia recorded nearly 2,000 natural ones throughout the year with the disaster mitigation agency confirming most of them — floods, landslides, and earthquakes — were related to extreme weather.

Being on the Pacific "ring of fire," earthquakes happen regularly in Indonesia.

A powerful tremor devastated Cianjur district of West Java in November, killing 335 people and causing over 2 million people to flee. It was the second most powerful earthquake in the province since July 2006 when a 7.7 magnitude earthquake followed by a tsunami struck Pangandaran beach, killing over 700 people and injuring over 9,000 more.

Some Church properties, including St. Peter Catholic Church and several buildings owned by religious congregations, were among those damaged by the quake.

Local authorities and non-profits, such as Caritas Indonesia, are working round the clock to help rebuild houses and buildings flattened by the quake. The restoration work will take months to accomplish.

These tremendous impacts on society require extensive interreligious and international cooperation to address them.

President Joko Widodo, as he handed over the first tranche of aid money to more than 8,000 victims to rebuild their homes, urged all sectors of society to work together and leave behind religious or cultural differences. Such an appeal was timely and important, amid the rejection of some Church aid by some people in the quake-hit area.

Cooperation is urgently required as state resources have been depleted. The government is focused on pandemic recovery efforts so one cannot rely only on government handouts.

During the recent G20 summit in Bali, Widodo convinced world leaders that international cooperation is needed more than ever now to solve crises facing the world like war and food insecurity.

The Indonesian president assured world leaders that despite its own domestic crisis, Indonesia with a 270 million population, wanted to unite with them and end the Russian-Ukrainian war to ensure global peace and remove food supply chain blockades.

During the religious summit, NU president Yahya Cholil Staquf tried to convince the world that Indonesia supports all efforts to solve domestic and world problems with a religious approach.

He said that world religious leaders must cooperate to increase the contribution of religions in solving world problems, reducing rivalries and stopping wars for a peaceful and unified world.

Indonesian bishops in their annual meeting last month also emphasized the meaning of a synodal Church. With their meeting centered around the theme, “Walking Together: communion-participation-and mission," the bishops not only responded to Pope Francis's call for a transformed Church but enhanced its relevance in the Indonesian context, emphasizing the role of Catholics in responding to the nation’s problems.

During the meeting, also attended by Nuncio Archbishop Piero Pioppo, former bishops conference president, Cardinal Ignatius Suharyo, emphasized that “the Church exists to spread the Good News. We can never be self-centered. Our mission is to bear witness to God's love amid the whole human family.”

The bishops’ recent assembly rekindled the nationalistic motto of the Indonesian Church “100% Indonesian, 100% Catholic,” which was introduced by the country’s first native-born bishop Albert Soegijapranata. He was quoted as saying that “if we love the Catholic Church, what follows is that we must love our country with all our hearts.”

The bishops also reflected on Pope Francis’ transformative efforts through the apostolic constitution Praedicate Evangelium (Preach the Gospel). It reforms the Roman Curia and in many ways is a wake-up call for further changes in churches around the world, starting from their bishops.

In the Indonesian context, Suharyo said, the pope's message further fosters enthusiasm for realizing a Catholic Church that is present, greets, and engages in heartfelt dialogue with people of other faiths.

A joint Christmas message from Indonesian Catholic bishops and Protestant pastors urged Christians to work together with people of other faiths during the rebuilding of lives that have been devastated by the pandemic and natural disasters.

The statement said: "Christians are called to build a civilization of love amid increasing acts of violence and intolerance. Christians are also called to be at the forefront in facing widespread environmental damage and developing an ethical political life ahead of the 2024 elections."

The Indonesian Catholic Church, with around 10 million followers, must always be the true “salt and light” for all Indonesians, especially the weak and marginalized.