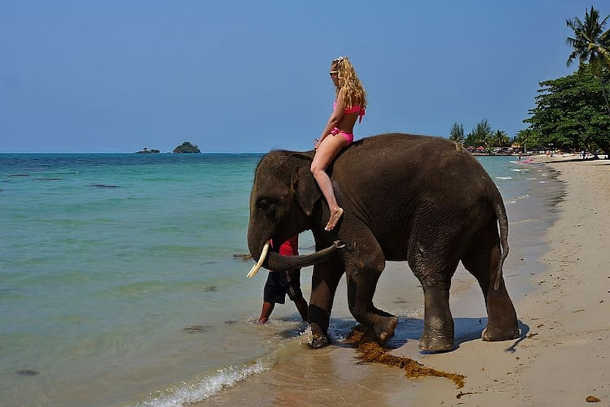 A tourist rides an elephant on a Thai beach. Thailand's closure of its borders during the European holiday season because of the Covid-19 pandemic has rendered thousands of elephants and their handlers jobless. (Photo: wallpaperflare.com)

Some 20 elephants have returned to a small village of Mae Chiem in Karen territory in the Chiang Mai region in the last few weeks. Before the coronavirus pandemic crisis, they were living in in one of the many camps in the city, where tourists can take them for walks, feed them or bathe with them. They were "working," as the locals say. With the closure of its borders since March, Thailand has no tourists and the elephant camps are deprived of any income.

"When it began, we tried to adapt," says Thanarat Pupei, a young mahout (elephant attendant). "The elephants ate a little less fruit and more herbs.” But as the situation continued, some camp owners eventually resigned, leaving the elephants and their attendants to fend for themselves.

The mahouts rarely own their elephants because of the expense involved. An adult animal costs about US$35,000. Usually, they look after the animals of someone else. They get poor pay of about US$250 a month, although theirs is one of the oldest trades in Thailand.

In the past, mahouts enjoyed an enviable status, thanks in particular to the place they occupied at court, where royal elephants were means of transport, war tanks and symbols of power. "Their knowledge is considered as art, wisdom and even as a form of spirituality in Thailand," says Tam Pranarat, project manager at the Phuket Elephant Sanctuary. In the past, mahouts passed down the knowledge about animal behaviour and the virtues of certain medicinal herbs from father to son through songs and gestures. Today, an eager industry "forms a mahout in a few days, and the elephant seems to accept it.”

‘Cruel activity has to stop’

The profession is also a lifelong commitment: an elephant normally has only one mahout.

Even though the era of mahout dynasties is over, the commitments continue. Even when food began to run out for most of them, there was no question of abandoning their elephant. "A mahout should never part with his elephant," says Thanarat. "He takes care of him, and in return the elephant helps him in his daily life. They are bound together for life.” Elephants have a lifespan similar to humans — up to about 80 years and with similar cycles. It takes almost 15 years for them to reach their full adulthood, and elephants stop breeding at around 45 years of age. Faced with the inaction of the owners, some mahouts have decided to go back to the forest to escape famine. In the north and east of Thailand, hundreds of elephants have walked the roads to their native forests. Most of them come from the Karen area on the border between Thailand and Myanmar. The journey took days, passing through villages, forests and fields. "Most of the villagers were amazed to see us. Some children had never seen elephants before. Others were afraid for their crops," says Nam, a mahout who traveled for four days between Chiang Mai and Mae Chiem. Elephant domestication is centuries old in these areas, where the animals helped people to harvest wood. For the elephant protection associations, which have been raising significant funds from abroad since the beginning of the crisis, the situation provides a unique opportunity to put an end to the industry, which gives rise to numerous abuses of the animals. "This is a cruel activity that has no place," says Lek Chailert, director of the Elephant Sanctuary in Chiang Mai. She is mobilizing with calls for donations, live broadcasts on social networks, in favor of the villages that now take care of elephants. The idea is to ensure that villagers and their elephants can stay in the forest, even after the crisis, and to build "ecovillages" where tourists can come and observe elephants in their natural environment.

While the idea sounds good, it faces many obstacles. First, it needs relatively large investments to build houses for tourists and developing these areas, which Karen villagers do not have. On the other hand, some associations feel that putting elephants under the responsibility of villagers does not guarantee the well-being of the animals. Several of them were known in the past for the capture, intensive training and resale of elephants to the city's camps. Finally, perhaps the major obstacle, may be the recent change in forest conservation laws, which now denies Karen people access to important resources to feed their elephants. "An elephant eats an average of 200-300 kilograms of food a day and drinks 150 liters of water," says Supinda, head of Mae Chiem village. River water is now so polluted that the elephants themselves refuse to drink it, she says. Many elephants, held in captivity for several decades, have little chance of survival in the forest. They need, she says, at least initially, the support of humans. "It's nice of you to tell us to make ecovillages," she says, "but if we're not allowed to take the elephants a little further away for food, we can't afford the cost of maintaining them on our own.”