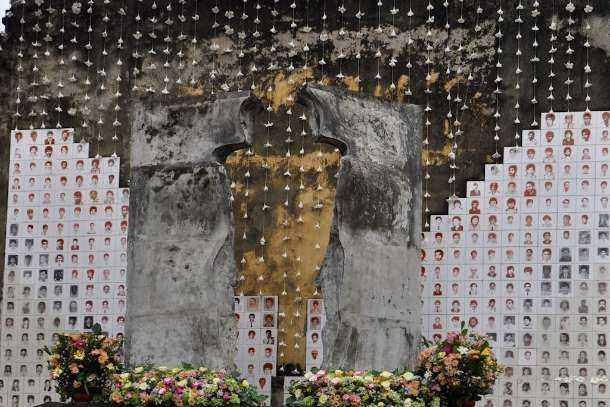 Families of the disappeared gather every year in front of a monument to Sri Lanka's missing persons at Raddoluwa in Seeduwa. (Photo supplied)

Dayawathi will never forget the day in September 1989 when her son was taken away in an army truck, never to be seen again.

"We shouted not to take our children but they were thrown into trucks," said Dayawathi, who lost her son during the Janatha Vimukthi Peramuna (JVP) insurrection of 1989-91.

These families struggle financially because they have lost their breadwinners. Their members are now very old and often have to take medication.

Sri Lanka has a history of enforced disappearances, both during the JVP insurrection and the civil war. It has the second-highest number of disappearances in the world.

The families of the disappeared gather every year on Oct. 27 in front of a monument to the disappeared at Raddoluwa in Seeduwa, but due to Covid-19 they could not gather for their loved ones this year.

Brito Fernando, a veteran human rights activist and president of the Families of the Disappeared, said that as a result of the struggle of families of the disappeared, Sri Lanka’s government ratified the UN Convention for the Protection of All Persons from Enforced Disappearance, legalized disappearances as a crime and established the Office of Missing Persons and  Office for Reparations.

Despite these few achievements, he said, positive results and performance cannot be seen in those institutions.

"For example, the Office of Missing Persons was set up to uncover the truth about what happened to these people, but the office has not revealed the truth in any of the cases," Fernando told UCA News.

"No governments have officially announced what happened to about 1,000 Tamil people who officially surrendered after the end of the war." A mother with photographs of her two missing sons. (Photo supplied)

Father Joseph Francis was among those leaving the war zone in May 2009 and was last seen passing through a military checkpoint. Father Jim Brown was last seen in 2006 on a motorcycle at a checkpoint in Allaipiddy, an area tightly controlled by security forces.

"Some 500 million rupees was allocated in the government budget in April 2019 to give 6,000 rupees (US$33) to each family but only 11 million rupees have been awarded to 153 families," said Fernando.

"These relatives demand adequate compensation, truth and justice and bringing perpetrators to book."

There was a spate of enforced disappearances during and after the civil war when rights activists, journalists, religious leaders and businessmen seen as opponents of the Rajapaksa regime were rounded up and never seen again, but his government denied any role in the disappearances.

Gotabaya Rajapaksa, the country's current president, served as defense secretary during the war and activists linked him to human rights abuses including the "White Van" kidnappings of rights activists that were either tortured or killed.

Prageeth Ekneligoda went missing in 2010 during the presidency of Mahinda Rajapaksa. Ekneligoda, an analyst and cartoonist, wrote about alleged corruption, nepotism and Rajapaksa's conduct during the military campaign of the civil war.

Many journalists disappeared or were killed during and after the civil war. All these cases remain unsolved.

The Free Media Movement (FMM) said Sri Lanka is a country that fails to deliver justice for crimes against journalists.

"There is an intolerable disregard about ensuring justice for crimes committed against journalists," Ranjanee said in a statement to commemorate International Day to End Impunity for Crimes against Journalists, observed on Nov. 2.

FMM called for the appointment of a fully fledged presidential commission to investigate crimes against journalists.

President Gotabaya Rajapaksa acknowledged for the first time that people who disappeared during the war are dead. When he met a UN envoy in January, he said steps would be taken to issue death certificates for those missing. The government also withdrew support to commitments made previously to the UN Human Rights Council.

Father Nandana Manatunga, director of the Human Rights Office in Kandy, said his organization wants to keep alive the stories of all those who disappeared and make documents for future reference.

"The next generation wants to know what happened to these disappeared," said Father Manatunga.

On the first Friday of every month, there is a gathering of families of the disappeared in the priest’s office. Father Manatunga supports those families through counseling and financial help.