Tribal violence could spin out of control 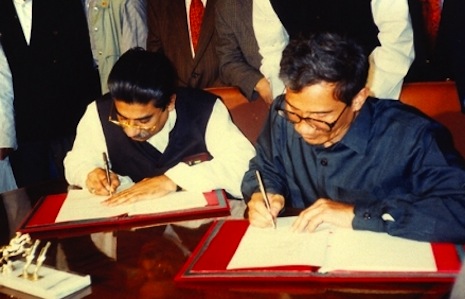 For the past two days, police have made baton charges and fired warning shots at rioters who were blocking roads and attacking government offices in the Chittagong Hill Tracts town of Khagrachari. This is only the latest chapter in a saga of unrest and violence in this remote region, where tribal factions have been feuding for centuries. It was hoped that the Chittagong Hills Tract Peace Accord, signed in 1997, would bring an end to the troubles. But these hopes have been in vain and recent incidents have shown a worrying increase in frequency and ferocity. Last month, senior members of the United People’s Party, the leading regional political group in favor of the peace accord, were victims of an armed ambush. Party leader Anil Chakma was killed and two of his colleagues were seriously injured. Accusations were leveled at the United People’s Democratic Front, which aims to dismantle the peace accord. But a spokesman denied the allegations, claiming that the bloodshed was the result of an internal wrangle. The next day a bomb blast rocked the neighboring town of Rangamari, targeting a bus carrying members of the Hill Students’ Council, a pro-accord youth group. The detonation left 14 people seriously injured; one of them later died in hospital. Again the UPDF denied responsibility, professing to be “deeply shocked and worried by an attack on students,” and casting suspicion on an unspecified “third party.” The recent wave of violence has been triggered by a number of land disputes.  Several tribal groups maintain that the Land Dispute Resolution Commission Act of 2001 is highly discriminatory and are demanding major amendments. At an emergency meeting in Dhaka, the United People’s Party warned the government that the situation could spin out of control in the coming months. “The people in the hills don’t want to hear promises any more, they want deeds,” said their spokesman. The government has responded by agreeing to review and amend the  Land Act during the current session of the parliament. But coming up with an alternative that will satisfy all stakeholders – there are as many as 25 different tribal groups in the region - will be no easy task. Close to the borders with India and Myanmar, the Chittagong Hill Tracts are a mass of gorges, ravines and cliffs, densely covered by lush jungle and shrublands. Despite its beautiful environment, outbreaks of tribal unrest have been part and parcel of its history. Tensions reached new heights in the early 1960s, when the construction of a hydro-electric plant submerged thousands of hectares of arable land and displaced literally millions of people. This was exacerbated in the 1970s and 1980s by successive government attempts to resettle Bengali people in the hills. It was these attempts that sparked the formation of numerous militant groups, most of whom are still in existence. Each has its own interests and agenda; each is determined to fight until its needs are met. Related reports Chittagong Hill Tracts killings spark panic Mass human rights violation, says report

Subscribe to your daily free newsletter from UCA News1
Thank you. You are now signed up to Daily newsletter
Related News
Support our Catholic journalism with a contribution of any size
Your contribution will help the Catholic journalists and editors in UCA News to report news, features, commentaries, video stories and podcasts on issues affecting the lives of millions of Catholics around the world.
Here is a gift of two valuable books as a token of appreciation to you.
Check your mailbox for links to these PDF/e-Books.