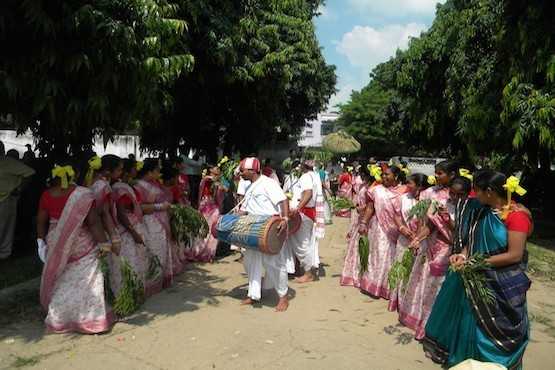 Tribal people, including church leaders, are against a new government policy in eastern Indian Jharkhand state that will help "outsiders" settled in the tribal-dominated area over its original inhabitants.

The state cabinet April 7 approved the "domicile policy" that has been in preparation since Jharkhand was carved out of Bihar state in 2000 purportedly to help the development of tribal people in the region.

The new policy enables anyone living in the state for the past 30 years or more to enjoy state social benefits.

The church is opposed to the "policy as it will help outsiders more than the locals" said Bishop Paul Alois Lakra of Gumla.

Critics of the policy say that since Indian independence in 1947, when mining and industries began to develop the area, hundreds of outsiders started migrating to their area.

"They are not tribal people. But with this new policy, tribal people have to share their quota of government jobs and educational seats with nontribal people," said the bishop who belongs to the Oraon tribe.

A policy to determine who benefits from state jobs and educational facilities was a long-standing demand of the tribal people, rooted in a cry for a separate state.

The policy became a sensitive issue in the state because of the tribal people lack of trust for nontribal people, whom they disparagingly call outsiders.

Church officials in the state have contacted officials at Chief Minister Raghubar Das' office. They have been assured that the policy can still be changed, Bishop Lakra said.

He said tribal people, including Christian lay groups, have planned a statewide protest May 15 to press the government for changing the policy in favor of tribal people.

Mukti Prakash Tirkey, editor of a weekly newspaper on tribal affairs published from New Delhi, said several industrial houses have set up their automobile and iron processing factories in the mineral-rich Jharkhand state, hiring people from outside.

"The new policy will include them also as Jharkhandi (people of Jharkhand) resulting in poor tribal people who have long been living in the states poorer," Tirkey added.

Father Cyprian Kullu, vicar general of Gumla Diocese, said the government "is more concerned about outsiders than the local people" because outsiders are politically influential.

"We will not keep quiet as the Jharkhand church is a tribal church and we will protest and fight for the rights of tribal people," Father Kullu said.

The state has close to 1 million Christians, almost all of them tribal people, in a population of 32 million people. Its 4.3 percent Christian population is almost double that of the national figure.

Gumla district, where Gumla Diocese is based, has a high presence of Christians. Over 20 percent of the district's 1 million people are tribal Christians.

Father Vincent Ekka, a tribal researcher at New Delhi's Jawaharlal Nehru University, told ucanews.com the policy is lopsided as it will help more outsiders get government jobs than tribal people because most tribal people are not qualified.

"State resources that could be spent for educational and health benefits of tribal people, will need to shared because of this policy," he said.