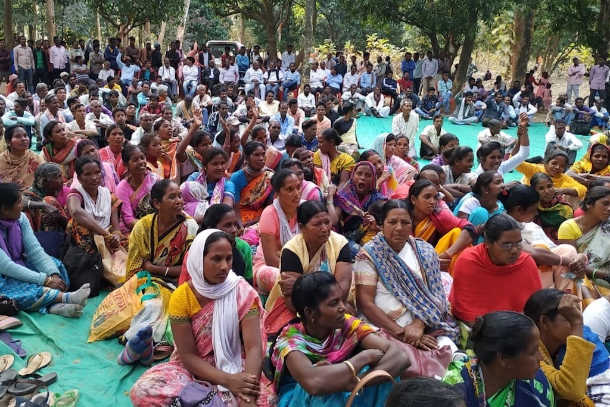 Tribal Catholics of Simdega Diocese in Jharkhand state attend a March 10 meeting to discuss issues they should consider before voting in the parliamentary election that starts in the eastern state from April 29. (Photo provided by Simdega Diocese)

Tribal leaders in India’s Jharkhand state say their people have emerged from political oblivion to become a decisive force in the upcoming parliamentary election.

They plan to use their votes to respond to government policies that hurt them, said Catholic leader Prabhakar Tirkey.

Tribal people, who follow both Christianity and the indigenous Sarna faith, can influence the outcome of all 14 parliamentary constituencies in the eastern state, according to Tirkey.

Prime Minister Narendra Modi’s Bharatiya Janata Party (BJP), which also runs the state government, won 12 of the 14 seats in the previous general election in 2014 after it promised development for all.

“Now the people are disillusioned with the government as the leaders continue to divide the country in the name of religion and caste,” said Tirkey, who lives in state capital Ranchi and chairs ecumenical forum Rashtriya Isai Mahasangh.

A "large chunk" of tribal people, including Christians, will vote against Modi’s BJP in this election, he added,

Officially the state has some eight million tribal people out of its 32 million people. While only some 1.5 million of them are Christians, most others follow their traditional Sarna faith. Some also follow the Hindu faith, leaders say.

Polling in Jharkhand is scheduled in four phases starting April 29. Christians’ votes are particularly important in five tribal-dominated constituencies that only tribal candidates can contest. Of these five, regional party Jharkhand Mukti Morcha (JMM) won the seats of Rajmahal and Dumka in 2014, while the other three — Khunti, Lohardaga and Singhbhum — went to the BJP.

“It is not right to accuse Christians of being against the Hindu party. If that was the case, the BJP would not have won the Khunti seat in 2014,” said Bishop Vincent Barwa of Simdega.

It is evident from past election results that Christians voted for the BJP in these constituencies after taking the party’s promises seriously. But people “are generally unhappy because of the misrule and harassment,” the bishop said, adding that the BJP has “made the life of Christians miserable.”

The government acted with “the sole objective of creating division among Christian and non-Christian tribal people” for votes, Bishop Barwa said.

Focused on harassing Christians, the state government enacted an anti-conversion law that criminalized converting from a religion without informing government officials, the prelate noted.

The state government with the help of New Delhi ordered a probe into foreign donations to Christian non-governmental organizations and jailed Catholic nuns and priests on fabricated charges, the bishop said.

“We church officials will not ask Catholics to vote for any particular party. The Church leaves it to the wisdom of the people to decide their candidate,” Bishop Barwa said.

Jharkhand Congress spokesman Kishor Nath Shahdeo told media that Christians have traditionally voted against the BJP. In 2014, the BJP might have got some share of Christian votes but it is different this time because of the way the BJP has treated Christians, he said.

Supriyo Bhattacharya, spokesman of Jharkhand Mukti Morcha, said the BJP knows that it will not get Christians’ support.

The BJP is “vengeful” towards the community on several issues and tribal people across Jharkhand are angry with the BJP “as it has looted their lands,” Bhattacharya said.

He was referring to the state government amending laws to remove restrictions on the sale and acquisition of tribal lands. Tribal leaders say the move aimed to take away their land to offer it to miners and big companies.

“The state government persecuted Christians in all possible ways for opposing its move to amend the land laws,” said Jesuit Father Xavier Soreng, a social activist in Ranchi.

Most of the tribal population are unhappy with the policies of the BJP and that might reflect in the election this time, he told ucanews.com.

However, BJP state general secretary Deepak Prakash said his party works for all without discriminating on grounds of caste or religion.

“Our motto is ‘Sabka Saath, Sabka Vikas’ (with all, development for all). We are not against any. We believe Christians will offer their full support to the party on issues of development and national security,” he said.