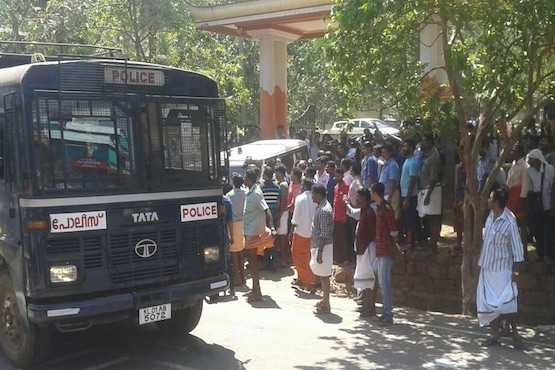 People gather as police bring Father Robin Vadakkancherry for investigation to his St. Sebastian's Church at Kottiyoor in Kerala after he was arrested on Feb. 27, 2017, for raping a minor girl student from a school under his management. (ucanews.com photo)

A court in southern India is to start the trial of a Catholic priest, more than a year after he was arrested on charges of raping and impregnating a 17-year-old schoolgirl.

The court in Kannur district of Kerala will finalize the trial schedule on June 18. Kerala High Court has directed the court to complete the trial within six months, government pleader B.P. Sadanandan told ucanews.com.

Father Robin Vadakkancherry of Mananthavady Diocese was parish priest of St. Sebastian's Church in Kottiyoor at the time of the alleged offense.

The 49-year-old priest was arrested and placed in custody in February 2017 after the girl gave birth to a boy.

His diocese, part of the Syro-Malabar Church, suspended him following his arrest.

Seven more people are facing trial on charges of trying to hide a sexual offence against a minor girl. All are on bail. They are the administrator, gynecologist and pediatrician of the church-run hospital where the delivery was conducted, a diocesan priest, a midwife who assisted the birth and two nuns at a church-run orphanage who arranged care for the baby.

The trial will be keenly watched in the state because of the way in which the girl, her family and officials of multiple church institutions spanning two districts allegedly collaborated to cover up the crime, rights activists said.

The church-run hospital did not report the minor status of the girl to police, while an orphanage accepted the newborn baby without required legal documents, it is claimed.

The government-run Child Welfare Committee of Wayanad district, headed by Father Thomas Joseph Therakam of Mananthavady Diocese, is accused of authorizing the orphanage to accept the newborn without verifying the mother's age.

Police charged Father Therakam with aiding the cover-up of a crime. He was also removed from chair of the district child welfare committee.

Police investigated the case after the government-run Child Helpline received an anonymous letter three weeks after the girl gave birth.

Father Vadakkancherry was arrested near an airport as he was allegedly attempting to flee the country.

Though the two accused priests have been suspended by the diocese, no action has been taken against the nuns for allegedly covering up a crime.

Diocesan spokesman Father Jose Kocharackal told ucanews.com the church will take action against the accused if they are found guilty by the court.

"It was an isolated case but was blown out of proportion by the media. An attempt was made to paint the entire clergy in a bad light. An entire community cannot be blamed for the wrongs done by a few," he said.

Father Kocharackal said the church was vigilant against all types of sexual crimes and will take stern action wherever required.

However, rights activist Jomon Puthenpurackal claimed that church officials acted only after their efforts to shield Father Vadakkancherry failed.

Puthenpurackal has been spearheading a campaign to bring justice for a nun whose body was found in her convent's well 26 years ago. Puthenpurackal maintains the "Sister Abhaya case" is the biggest example of the church protecting criminals, claiming that officials aided a nun and two priests accused in the case after an investigation established a murder related to sex.

"Sex violations are on the rise in the church in Kerala. This is because the church is protecting the guilty. If church officials stop this and take stern action against the guilty, such cases will come down," Puthenpurackal said.

A string of sexual assault cases involving clergymen have been reported recently.

In the latest case, police arrested 35-year-old Father Thomas Thanninilkumthadathil of Palai Diocese on Feb. 16 on charges of raping a 42-year-old Bangladeshi native in Kerala after he befriended her through social media. He was suspended following his arrest.

In December 2017, a special court in Ernakulam handed down a double life term to Father Edwin Figarez on charges of raping a 14-year-old several times from January to March 2015 in the priest's parish residence in Thrissur district. He too was suspended soon after arrest.

In 2013, Father Arokiaraj of St. Stanislaus Church in Palakkad was dismissed from the clergy by the Vatican after a 17-year-old girl was found dead. He later admitted raping the girl but Kerala police declared her death was suicide. Arokiaraj later allegedly confessed in a telephone conversation to killing the girl.

Puthenpurackal said cases involving priests were coming to light because of social media. "Earlier, such cases were suppressed by the church by exploiting the religious sentiments of people," he said.