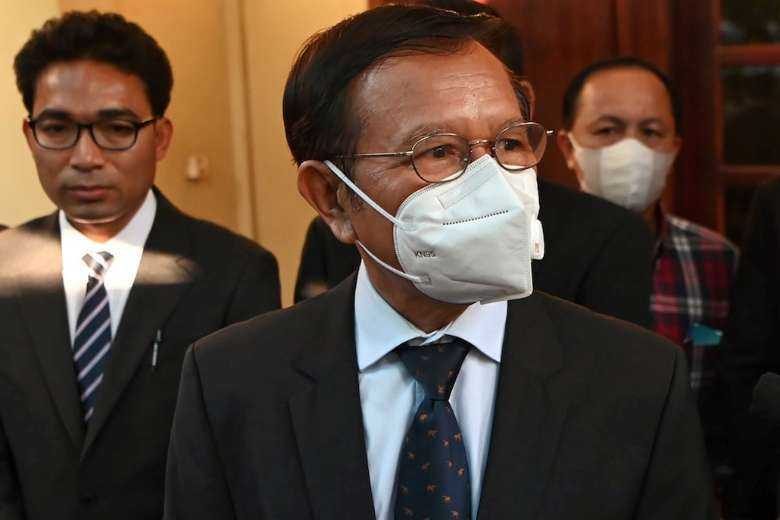 Kem Sokha, former leader of the Cambodia National Rescue Party (CNRP), speaks to the media before going to Phnom Penh Municipal Court for the resumption of his trial on treason charges on Jan. 19. (Photo: AFP)

The treason trial of the former president of the outlawed Cambodian National Rescue Party (CNRP), which the United States has found “troubling,” resumed today after a two-year delay due to the Covid-19 pandemic.

If convicted, Kem Sokha faces up to 30 years behind bars in response to government allegations he conspired with foreign forces to overthrow Prime Minister Hun Sen, charges which have troubled the West and outraged human rights groups.

“We are very troubled to see that prosecutors have introduced into the courtroom fabricated conspiracy theories about the United States,” Patrick Murphy, the US ambassador to Cambodia, said after attending a trial hearing in 2020.

Cambodian prosecutors have often claimed the involvement of “foreign forces” who were funding opposition political outfits, particularly the CNRP, a touchy diplomatic subject which is avoided by the government.

However, shortly after Kem Sokha’s arrest in 2017, Hun Sen accused the opposition president of conspiring with the United States to oust his regime.

Much of the prosecution hinges on the release of a video, shot badly on a smartphone in Springvale, a working-class suburb of Melbourne in Australia, which is heavily populated by the Khmer and Vietnamese diaspora.

The USA, which has assisted me, has asked me to take the model from Yugoslavia, Serbia, where they were able to change the dictator Milosevic

In the video Kem Sokha can be seen and heard telling his faithful that the CNRP was offered outside political advice which the Cambodian government would later insist was evidence of an international conspiracy.

He refers directly to the United States and added: “The USA, which has assisted me, has asked me to take the model from Yugoslavia, Serbia, where they were able to change the dictator Milosevic.

“I don’t just do what I feel, I have experts, university professors in Washington DC, Montreal, Canada hired by the Americans in order to advise me on the strategy to change the leaders.”

The CNRP was then dissolved and Hun Sen’s Cambodian People’s Party (CPP) won every seat contested at elections the following year, resulting in the withdrawal of some trade perks by the European Union.

Phil Robertson, deputy Asia director of Human Rights Watch, said Hun Sen and his government decided to blame foreigners and point to a so-called “color revolution” to fabricate a justification for the Supreme Court to dissolve the CNRP.

“The resumption of Kem Sokha’s trial in Phnom Penh after an almost two-year hiatus doesn’t alter the fact that these bogus, politically motivated charges should have never been brought against him in the first place,” he said.

“This whole charade has been about preventing anyone from using the ballot box to meaningfully contest Hun Sen’s leadership, which is particularly important as commune-level elections are scheduled to be held across the country in mid-2022.”

Amid tight security today, Kem Sokha attended a brief court hearing watched by international and local diplomats. The hearing was adjourned to Jan. 25.

Hun Sen has said he will stand down after national elections in 2023, preferring to hand power over to his eldest son Hun Manet, who was endorsed by the CPP and its politburo as a candidate shortly before Christmas for the job as prime minister.

More than 100 CNRP supporters have been detained and are on trial for charges ranging from incitement to treason. Some have been released after renouncing their political affiliations.