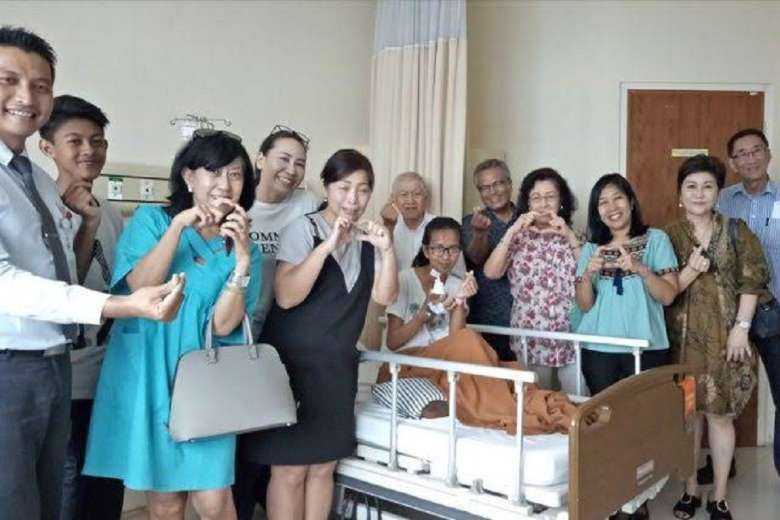 Desmonda Paramartha is visited by parishioners while being treated in hospital 2018 following the bomb attack. (Photo supplied)

Four years ago, when Desmonda Paramartha became one of the victims of a suicide bombing at a Catholic Church in Surabaya, Indonesia’s second-largest city, she was angry.

"Why am I a victim and what did I do wrong to them [the bombers]?" she recalled asking.

The questions occasionally resurface in her mind in the midst of trying to come to terms with the tragedy and make it an experience of faith.

Desmonda and a friend of her fellow Catholic Youth members were serving as parking attendants at the Santa Maria Catholic Church in Surabaya when a bomb exploded near the church gate.

The explosion that Sunday morning was only about five meters from where she was helping to park parishioners’ vehicles. Bomb fragments hit her in the neck, thigh and calf.

Desmonda, who was 19 years old at the time and still in college, underwent a four-hour operation and was hospitalized for five days, after which began a four-month recovery process.

Santa Maria Church was one of three churches targeted in the suicide bombings in the capital of East Java province on May 13, 2018. The others were two Protestant churches, the Indonesian Christian Church and the Surabaya Central Pentecostal Church.

The attacks, carried out by a Muslim family with links to the Islamic State group, killed 19 people and injured dozens.

"I choose to come every year, as part of the recovery process," Desmonda said.

Another attack on the city's police headquarters the following day by another family killed at least four people and injured 10 others.

Desmonda said the memory of the tragedy still lingers and continues to influence her way of thinking.

She told UCANews that even though she feels much better now, there are still things that keep bugging her, especially her views on Muslims.

She said she often has flashbacks of the bombers, a mother and daughter wearing veils, which makes her anxious when she now sees Muslim women wearing them.

"That feeling continues, although now it's much less traumatic than in the first few months after the attack when she "had strong feelings of resentment towards them," she said.

She said she was still struggling to fully recover from the trauma, and trying to continue to convince herself that the perpetrators were misguided individuals.

Desmonda said she was grateful for the help of her parish, which every year on May 13 always remembers the attack, while inviting Catholics to see it as an event of faith and maintain good relations with people of other religions.

The event included a Mass for the victims, where the photos of the six people that were killed at the church were displayed in front of the altar.

Prior to the Covid pandemic, the event was accompanied by an interfaith youth gathering on the evening of May 12, where they encouraged each other to maintain harmony.

"I choose to come every year, as part of the recovery process," Desmonda said.

"Why? Because we don't know what will happen later today, tomorrow or next week,” she said.

At this year's event, parish priest, Father Benedict Prima Novianto, said that the terror attack caused disappointment and deep sorrow among all Catholics.

However, he said, terror should not make people afraid to live together in love.

Catholics, he said, are part of a large body of Indonesian people who are diverse, but united in Pancasila — the five principles of Indonesia's national ideology based on secularism — as the philosophy of life for the nation and state.

Therefore, he said, terror should not tarnish and damage humanity and brotherhood because "relations are restored with forgiveness and generosity."

"Catholics see the bombing as an event of faith by having the courage to apologize, evaluate ourselves, and change our attitudes and views," he said.

In addition to trying to live up to such an invitation, Desmonda said she also chose to remain faithful to serve in the church, which she felt helped her to recover, thanks to the support from her fellow parishioners, nuns, and priests in her parish.

"After the bombing, I became more active in Church activities both in the parish and in Surabaya diocese," she said.

Desmonda, who now tutors elementary school students, said she can now forgive people more easily, something that was quite difficult for her to do before.

"Why? Because we don't know what will happen later today, tomorrow or next week,” she said.

"To be sure, I'm just trying to sow goodness, while hoping that such attacks don't happen again.”