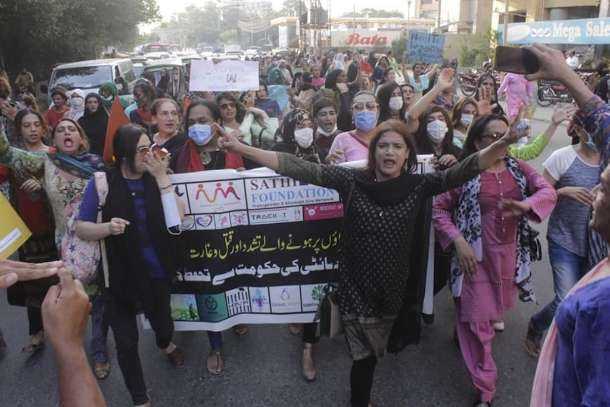 Scores of transgender people took to the streets in the southern Pakistani city of Karachi to protest the rising incidents of violence against the long-suffering community.

The Sept. 15 protest was led by Bindiya Rana, president of Gender Interactive Alliance Pakistan (GIAP), which works for the rights of the transgender community.

The protest came in the wake of the killing of two transgender persons in Pakistan’s Khyber Pakhtunkhwa province in separate attacks last week.

On Sept. 11, Saad, a transgender man, was killed by his brother in Swabi town as he was returning home after performing at a dance party in the garrison city of Rawalpindi.

The attacks prompted transgender activists to hold protests in Karachi, Lahore, Mardan and other cities.

Arzoo, a transgender woman, strongly condemned the attacks against her community.

“The recent spate of violence is very disturbing and concerning for the entire trans community. Many are even afraid to venture out due to fear of attacks and violence,” Arzoo told UCA News.

“We are treated and viewed by society as if we are aliens. The issue of human rights and respect comes later. I request our human rights organizations and activists to stand with us and raise their voice for our rights as equal citizens of Pakistan.”

Safina Javed, a Christian activist and chairperson of the Peace and Welfare Organization, said transgender persons are the most vulnerable people in society and face high levels of discrimination and violence.

“The government should make clear, through public messaging campaigns, that everyone has the right to access healthcare and include trans people in welfare programming to sustain their health and livelihoods,” Javed told UCA News.

According to Pakistan’s Transgender Association, at least 73 members of the transgender community have been killed since 2015.

Officially recognized in Pakistan as "third gender," members of the community face abuse, attacks and societal discrimination and are forced to survive on begging and prostitution.