Security personnel and onlookers stand at the site of a train accident in the Daharki area of Sindh province on June 7 after a packed Pakistani inter-city train ploughed into another express that had derailed. (Photo: AFP)

Church officials are criticizing Pakistan’s government following a train crash in a southern province that resulted in the deaths of at least 40 people and injured dozens.

The double accident happened around 3.30am local times when most of the 1,200 passengers aboard the two trains would have been dozing.

The Millat Express was heading from Karachi to Sargodha when it derailed on June 7 morning, spilling carriages onto the track carrying the Sir Syed Express from Rawalpindi in the opposite direction.

Rescue officials were trying to free injured passengers still trapped in the wreckage near Daharki, a city located in the Ghotki district of upper Sindh province.

Kashif Aslam, national coordinator of the National Commission for Justice and Peace, the human rights arm of the Catholic Church, demanded accountability from the Railway Department.

“Someone has to be responsible morally and ethically. Most of the passengers are of the lower middle class using a railway system, for a long journey, dating back to the 19th century,” he said.

Pastor Irfan James, a missionary, is visiting the interior of Sindh with his family, said "several train accidents have occurred at this haunted station."

"We blame government negligence for faulty tracks. We waiting for the repair of the tracks," Pastor James said.

"One coach is under the engine, and we can see three bodies trapped inside," he told AFP.
Related News 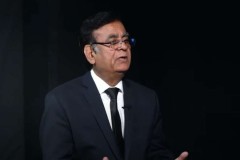 Thank you. You are now signed up to Daily newsletter
"Two other bodies have been reported elsewhere too, so we fear that the death toll will rise," Tufail added.A clip aired on a local channel showed medics giving an intravenous drip to a conscious passenger whose lower torso was trapped between crushed carriage benches.Communication problemsThe accident happened on a raised section of track surrounded by lush farmlands.Interior Minister Sheikh Rashid, a former railways minister, said the track where the accident occurred was built in the 1880s and described it as "a shambles".A senior police official said he had already warned authorities about the "dangerous condition" of the tracks and carriages.The Pakistan army and paramilitary rangers from nearby bases were at the site to help.Prime Minister Imran Khan said he was "shocked" by the accident and promised a full inquiry.Gul Mohammad, who works with the Edhi Foundation ambulance service which was helping move dead bodies away from the site, said communication problems were hindering the coordination of the rescue efforts"I am talking to you as I stand on the rooftop of my ambulance for better signal," he told AFP.Rail accidents are common in Pakistan, which inherited thousands of kilometres (miles) of track and trains from former colonial power Britain.But the network has seen decades of decline due to corruption, mismanagement and lack of investment.More than 300 people were killed and 700 injured in 1990 when an overloaded 16-carriage inter-city train crashed into a stationary freight train near the city of Sukkur in Sindh.More recently, at least 75 people died when a train caught fire while travelling from Karachi to Rawalpindi in October 2019.

(With input from AFP)