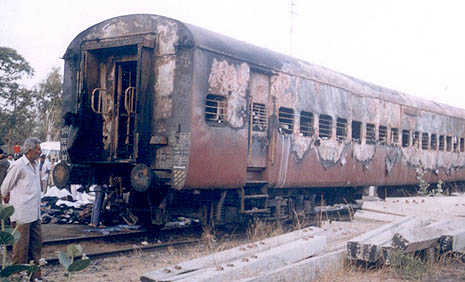 A court in Gujarat today convicted 31 people for their involvement in the 2002 attack on a train at Godhra in which 59 Hindu pilgrims were burned to death, triggering one of the worst sectarian riots in India's history. But the court in Ahmedabad, western India also acquitted 63 people, including the main accused Maulvi Umarji. The case has been highly divisive with Muslim groups and Christians saying the Hindu pilgrims had provoked the riots. They say the attack was a spontaneous action and not premeditated and had been used as a pretext for an orgy of violence against Muslims. The incident led to statewide anti-Muslim riots that killed 1,182 people, displaced 100,000 people and destroyed hundreds of Muslim properties. The court, however, upheld the police version that the carnage was the result of a conspiracy to kill the Hindu pilgrims by torching the railway carriage on February 27, 2002. The state’s pro-Hindu Bharatiya Janata Party (Indian people’s party) also endorses that version of events. Jesuit human rights activist Father Cedric Prakash says the conspiracy charge failed because the court had found the main accused innocent. “Yet, the court held the incident as a conspiracy is really ridiculous,” he said. “The judgment is a total disaster,” says Bishop Rosario Godfrey de Souza of Baroda whose diocese covers Godhra. “The judiciary seems to have lost its backbone and is only catering to the needs of the government, overlooking justice,” the Jesuit said. He regretted those acquitted had to spend nine years in jail “for no fault of theirs.” Another Jesuit activist Father Stanny Jabamalai wants the government to compensate the acquitted. “What about justice to them as they have been wrongly jailed for all these years'?” he asked. The trial began in 2009. The accused have been in jail since 2002, accused of criminal conspiracy and murder. The hearing ended in September 2010 but the Supreme Court stayed the announcement of the verdict. The stay was lifted in October last year. Related reports Sectarian Violence Revisits Gujarat, Bishop Blames Unresolved PastMuslims In Gujarat Welcome Supreme Court Order To Reopen Riot Cases ID13392.1642