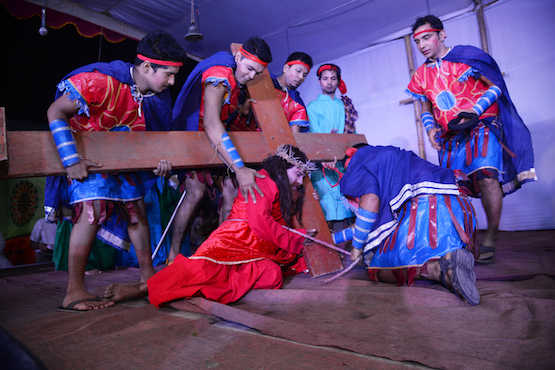 With candles in their hands a group of actors emerge on stage in front of several thousand Catholics. A prayerful silence falls. The silence breaks as the actors start singing the prelude of Jishu Nila, a play based on Jesus' life.

This was the scene last Friday evening at a school ground in Tejgaon, central Dhaka, where crowds gathered to watch the traditional folk play instead of attending the regular Lent liturgy at the Holy Rosary Catholic Church.

For nearly five hours, the troupe enacted Biblical stories, including the story of Creation and the fall of Adam and Eve. The play culminates in the life, ministry, crucifixion and resurrection of Jesus. It is accompanied by music and dialogue.

The troupe members were from Chorakhola village in Gazipur district near Dhaka, where Catholic teacher-catechist Peter Dominic Rozario originally wrote the play in the 1940s, along with 17 other religious folk-plays and devotional songs.

"Jishu Nila is a traditional means of preaching the Good News, to infuse spirituality and devotion by presenting the Bible in a lively way," said Douglas Placid Gomes, 44, who enacted the character of the Jewish high priest Caiaphas.

For 10 years, Gomes, a physician, has been involved with the group, following in the footsteps of his forefathers.

"My grandfather, father and uncle have acted in the play and so I have followed them. We are proud to continue the tradition and we will try our best to help it survive forever," he added.

The troupe members rehearse the play on weekends before and during Lent. They have a fund set up with donations from local and overseas Christians, Gomes said. The scene of birth of Jesus Christ during the Lenten folk-play. (ucanews.com)

Chorakhola is part of the Catholic Church in Tumilia, one of the seven Catholic parishes in Gazipur and Dhaka districts, collectively known as the Bhawal region. In this Catholic stronghold such popular traditions are still held in reverence.

In villages, the performance usually takes place on the yard of a big house or open field. It is staged mostly during Lent, but also at other times throughout the year by people seeking a favor from God.

The actors don't get paid for the performance but get some money from the organizers to pay for decorations, costumes, make-up and hired musicians.

It is believed that the preaching of Dom Antonio in the 18th century strongly influenced the plays and songs composed by Peter Dominic Rozario.

Antonio was the son of a Hindu zamindar (landlord). He was kidnapped by pirates from Arakan (present-day Rakhine) and sold to Portuguese merchants.

A Portuguese Jesuit rescued him and he became a Christian, adopting the name Dom Antonio. Under influence of the Jesuits he became an evangelist.

As a part of his preaching, he composed religious songs based on the catechism and Biblical stories and performed them with dance in the Bhawal and Atharogram areas.

His unique evangelization methods are credited for the conversion of 30,000-40,000 lower caste Hindus in 1720-60s and establishing these areas as Catholic strongholds.

In the past all parishes in Bhawal as well as those in the northern Natore and Pabna districts used to have Jishu Nila troupes. Today the one in Chorakhola is the only active troupe.

Modern life and a lack of patronage have a negative influence, Gomes says.

"It's not easy to keep up a group. It's completely voluntary and it's hard to rehearse as people are busy with jobs and family," Gomes said.

"If the church extended support, financial and otherwise, they could have been sustained better," he added.

Lata Margaret Rozario, 54, a Catholic housewife, says she appreciates the tradition, but noticed some 'missing links.'

"In my village home as well as in Dhaka I have watched the play several times and now I notice some differences. In those days, this play was so realistic it moved people spiritually and emotionally," recalled Rozario, who migrated to Dhaka some 20 years ago from the northern Pabna district.

"Today, it seems artificial and less attractive. Maybe because actors are new and because of a lack of sponsorship," she said.

Watch this ucanews.com video to see more of the Jishu Nila play.

Rozario said the church authorities must take the initiative to preserve the tradition.

"These traditions are our asset because we have grown up watching them. It's time the church makes some move to sponsor them, so future generations might take them seriously and get lessons for life," she added.

Sunil Pereira, a Catholic media worker, who also hails from Chorakhola, has done some research on popular piety like Jishu Nila.

"In the past, people used to cry watching the play and even tried to touch the actor who played Jesus, but now we don't see it anymore. People have changed and if we want to attract them we must make it modernized and professional," Pereira says.

"We absolutely need to preserve it and it's possible if the church and Christian financial organizations offer support. They can sponsor the play and organize shows in different places, to spread it among people. Christian communication centers can record the show in the studio and distribute it," Pereira pointed out.

"We need to realize the passion play is not just an asset of Christians, but also part of the rich cultural heritage of Bengal. It needs national exposure and the church can help," Father Perez said. 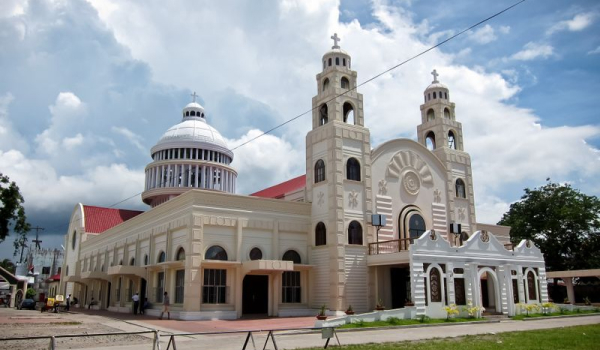